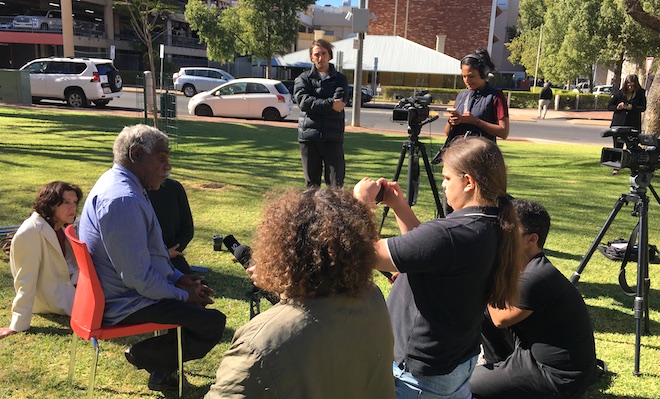 Above: Media with Ned Hargraves, chair of the Warlpiri Parumpurru Committee, seated; behind him, Lisa Watts, secretary of the committee.

The trial of Zachary Rolfe, the police officer accused of murdering Kumanjayi Walker in Yuendumu on November 9 last year, inched closer this morning, with the prosecution suggesting tentative dates for a committal hearing (preliminary oral examination) as early as September.

Delays have been caused by the pandemic shutdown as well as the huge brief, the court has previously heard.

Outside the court in Alice Springs, Ned Jampijinpa Hargraves, chair of the Warlpiri Parumpurru [Justice] Committee, accepted the drawn-out timetable as happening “for a reason”, even though that is not the Yapa way.

“We as Yapa we want to get it over and done with but we can’t because the Kartiya system is not our system, we have to go along,” said this community leader, who also has years of experience in the courts working as an interpreter.

“We want to see justice …  Hopefully this will, not hopefully, this will make something happen.”

Mr Rolfe, who is pleading not guilty to the charge,  appeared by video link, as did everyone else involved in the proceedings. Judge John Birch was in Tennant Creek; Prosecutor Collette Dixon  was in Darwin; and Defence Counsel Luke Officer and Anthony Allen were in Adelaide.

Impossible to say anything about the demeanour of Mr Rolfe, who continues to reside with his parents in Canberra: he was a dark-clothed figure in a grey room, taking up a quarter of the already-distant monitor screen. 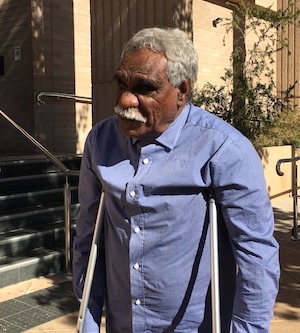 This condition of his bail continues to rile the Warlpiri Parumpurru Committee.

“We want to see the bail condition revoked,” said Mr Hargraves (at right, leaving the court).

“We want Rolfe behind bars …

“If it was a Yapa like me, an Indigenous person like me, I would not ever, ever go back to my mother, my father. If I did go back I would get a spear across my legs. That’s the punishment …

“The whole system needs to realise … there can’t be another law for Kartiya, white people, there gotta be a law for Yapa too, that’s why we finding it so hard.

“I must say this, we are living in a racist world, it’s got to stop, we’ve got to come together somehow and work it.”

Mr Hargraves spoke at the recent Black Lives Matter rally in Alice Springs. On this global movement he said today: “We feel that we are not alone. We feel that this is something that every Yapa no matter where … we all are one, united, and I’m so thankful for America to have the same problem and also to fight it, to stand firm and strong.”

He also stood by his previous call for no guns on communities, saying to the media present: “We feel strongly that we can’t trust anybody, we can’t even trust you guys.”

Inside court, Judge Birch had not been prepared to provide any firm dates for a possible preliminary examination.

A timetable was agreed for the next steps, exchange of materials including witness lists between the parties and the provision of the full brief, expected to be by August 5.

The other significant matter is that Defence Counsel will be making an application for “non-publication” and the Prosecution consent to it. It was not clear whether the Prosecution’s consent was to making the application or to its content.

It was not said what aspects of the case the “non-publication” would apply to. To consider it, Judge Birch said he would “need further material”.

This will be provided by affidavit and the application will be heard next Wednesday, July 1.