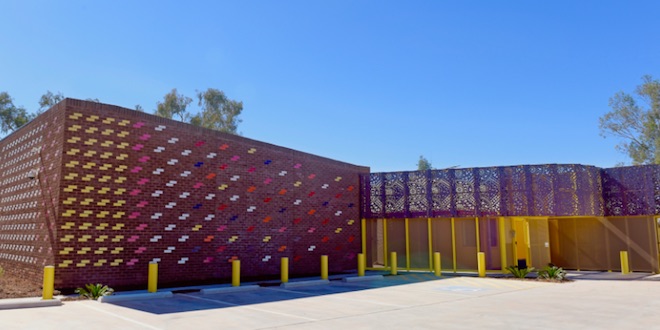 Many locals driving past the Telegraph Terrace site would have noticed the facade for its points of colour in the brickwork and the perforated metal screen adapted from an artwork by a former resident of the shelter.

Having the facade provide both “a secure barrier and a welcome, civic presence on the street” was a key challenge for the design team: Andrew Broffman, Robyn Shaw, David Havercroft, Stephen Saines, and Daniel Wolkenberg.

They developed the project in close consultation with the shelter’s staff, focussing on their mission to provide “safe respite and space for restoration of dignity, agency and respect”.

Inside they wanted to create “a sense of quietude”. The day areas (example at right, photo by Hannah Millerick) are light-filled and spacious, even where they are divided into smaller spaces.  This feeling of openness and calm, with the possibility of degrees of seclusion and privacy, extends to the outdoor areas.

Susan Dugdale and Associates were commended in the Educational Architecture category for the new buildings and campus at Acacia Hill School, which caters for students with special needs.

The new entry (see at bottom) celebrates and welcomes students and staff to the school, drawing the bright façade colours from the colours of central Australian art, while the steel cutout mural refers to the acacia trees on the neighbouring sacred site, creating a sense of place. 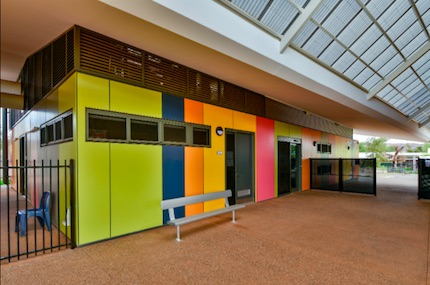 “Access control and site legibility” were key considerations for the design team – Susan Dugdale, Miriam Wallace, and Flynn Carr – in providing security and independence for students.

Flexible new indoor and outdoor spaces allow the school to modify its environment to suit the different and changing intellectual, behavioural and therapeutic requirements of the students.

The awards are run by the Australian Institute of Architects. All NT Chapter winners will now progress to the National Architecture Awards.

Acacia Hill School, entry, this photo and above left by Susan Dugdale. 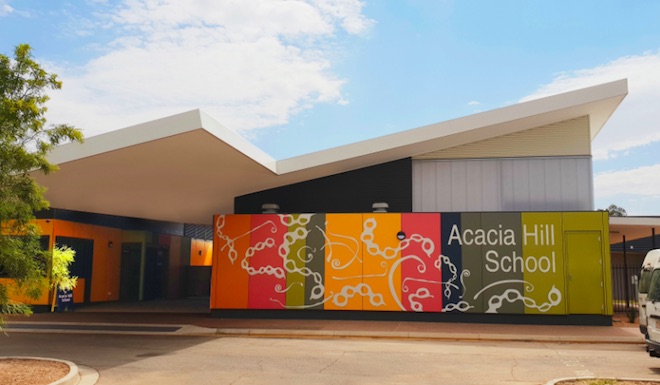