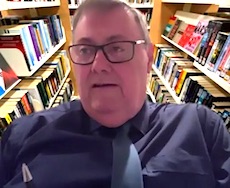 The candidates in the August Territory election currently hold the positions of Mayor and Deputy Mayor respectively.

Their opportunity to publicly criticise their political opponents – and one in particular, Chief Minister Michel Gunner – was unfettered by any objections from their colleagues despite council’s protracted debate in recent months on the issues of conflict of interest, perceived or actual, particularly in relation to councillors running for political office in other tiers of government.

According to Councillor Eli Melky – and other councillors had heard it too – Mr Gunner last week declared on ABC radio that he could no longer work with council on big projects.

There’s one big project, of course, where council and the government are at loggerheads – the proposed national Aboriginal art gallery – although it’s entirely questionable whether council is to blame for that.

Mr Gunner, himself increasingly desperate in his political attacks, and yesterday made a laughingstock on Media Watch for hiding from a journalist, was last night accused by Cr Melky of using the Mayor as a “punching bag”.

Of course, Cr Melky also has political ambitions in the run-up to the August elections, as the coordinator of a new political party.

Mr Ryan burst out laughing and wanted to add to Cr Melky’s argument.

He alleged that all councillors had been removed from the invitation list to last Friday’s Creative Industries Strategy launch in Alice Springs, and that the same thing had happened in Tennant Creek where Steve Edginton, Barkly Regional Council Mayor, is also running for the CLP.

“These people are bullies and hide behind it with their position. It is disgraceful!” declared Mr Ryan.

Cr Melky wanted a letter written to the Chief Minister, co-signed by the Mayor and CEO, to refute his “disappointing” attack on council.

Cr Jimmy Cocking, in the chair, supported a letter that would demonstrate council’s “moral leadership in this situation” and assert that they are willing and able to work with the government on major projects.

Mr Ryan did not talk about the letter but took the opportunity to continue the stoush – and was “glad the press are here this evening” to report it.

Council had delivered on infrastructure projects, he said, and Minister [Dale] Wakefield had been “happy to open some of them”, mentioning the works along Ilparpa Road (project managed by council) that delivered on a promise by Labor MLA Chansey Paech.

He complained of the Chief Minister’s “disdain” for local government: earlier in the term the NT had been the only jurisdiction in Australia without a department of Local Government (this has changed); and Mr Gunner has never come to the chamber and met the elected members, the only Chief Minister not to do so in Mr Ryan’s time in local government. 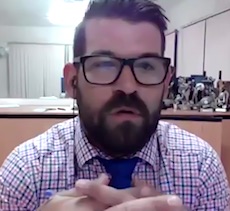 Time for Mr Paterson (at left) to chime in: The Chief Minister’s “disappointing” attack was backed by the Member for Braitling’s suggestion that council may deliver but is “a bit slow” – a “kick in the teeth” to council.

He suggested a letter could include council recommendations on how to do consultations for major projects. (The government’s approach to consultation, especially of custodians, has been a major sticking point for the gallery proposal.)

Cr Jamie de Brenni wanted nothing to do with a letter, he was sick of “justifying ourselves” to “this mob”, “if that’s as petty as they want to be, let them be”.

Cr Jacinta Price thought a letter, if written, should outline council’s attempts to work with the government, only to be “continually thrown under the bus”.

Councillors have all demonstrated, she said, that they can work together despite their differences of opinion and make decisions on behalf of the community, putting them first – she certainly couldn’t say the same for the Chief Minister and the NT Government. (The Code of Conduct saga which she brought on is apparently a distant memory now.)

Mr Ryan had the floor again: He criticised the government’s new Central Australian Economic Reconstruction Committee, headed up by Ms Wakefield, for lacking representation from council; the CBD revitalisation was promised four years ago yet its first plans only went on display 10 days ago; development of a seniors lifestyle village has been continually knocked back by the government (through its Regional Economic Development Committee); and progress on the Outback Way has been held up by a lack of funding support from the government.

“This government has not delivered for Alice Springs and has used council as the whipping boy,” Mr Ryan went on.

There had been no communication from government with council since Mr Paterson announced his candidacy on 11 May.

“This group are duds, thank you,” concluded Mr Ryan.

Still no demur from any councillor.

Crs Glen Auricht and Catherine Satour saw no value in writing a letter, Cr Auricht noting that CEO Robert Jennings had been given right of reply on radio and had “covered the topic admirably well”, outlining all the projects where council has worked and delivered with government.

Cr Marli Banks deplored the “really distasteful” focus on council by the government and aspiring MLAs.