The allure and the conflicts of rural living 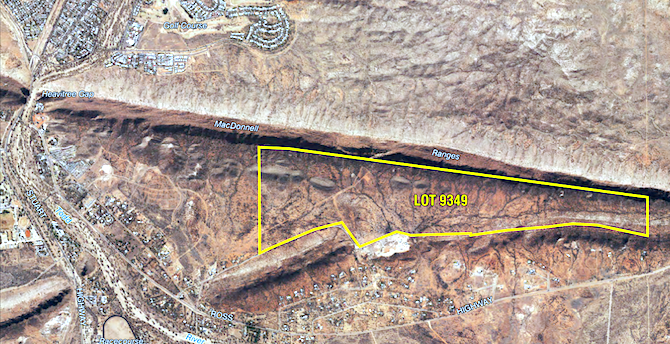 There are two types of people in Alice Springs: Those who are living on spacious land in the “farm areas” south of The Gap, and those who would like to.

So say developers and opponents slugging it out over the Stegar Road application for an Exceptional Development Permit covering 51 rural-style blocks. The two sides don’t agree on much else.

In Thursday’s hearing of the NT Planning Commission Rod Cramer, the chair of the Rural Area Association, said the application was exceptional all right because it is “exceptionally poor, naive, crass and arrogant”.

Norm Gardner, consultant to developer Craig Lambley, suggested locals were looking again for something bigger than the quarter acre (or less) blocks in town.

But gaining residential access to our wide open spaces is fraught with immense planning cost to comply with government red tape and council regulations.

There may be cultural tensions over sacred sites.

Public apprehension is likely over the frequent abuse of big blocks once they come into private hands, as can be seen throughout the existing farm areas, with authorities turning a blind eye.

The Stegar Road (photo at top) project is closer to town than Ilparpa and Rangeview Estate, set in a beautiful valley beneath the southern slope of Mount Johns, the start of the East MacDonnells.

The developer’s application cost “hundreds of thousands of dollars” according to Mr Lambley, runs to 338 pages, takes 20 minutes to download, and is full of material indigestible to mere mortals.

This hugely complex process is dealing with an issue significant to the town’s development. 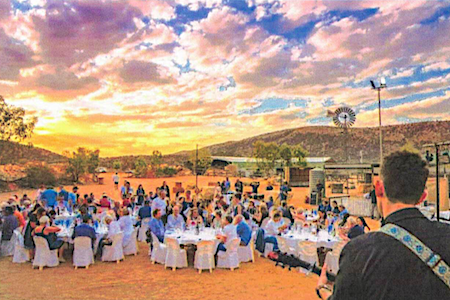 Yet a mere 17 public submissions were lodged, 12 of them entirely or mostly complaining about the adverse impact on the al fresco dining business in the Old Quarry, provided by Danny Brennan’s Tailormade Tours, a successful tourist attraction developed over 18 years (images from the company’s submission).

Three of these 12 submissions came from tourism companies dealing with Tailormade.

There were no submissions in favour of the development.

The Town Council gets a say but limits itself mostly to issues of roads and drainage because it will take over the subdivision at some point in the future.

The council’s “draft for approval” attached to the development application includes such issues as: “Batters to be 1 on 4 max. with a vee drain on high side and flat bottom drain (2.5m wide min.) on low side. Ensuring flow capacity for SW design is considered. Min, depth of table drain to be 300mm from bottom of pavement at seal edge. Min. depth below NS to be 200mm. Council agreed.”

And so on, two and half pages of it. 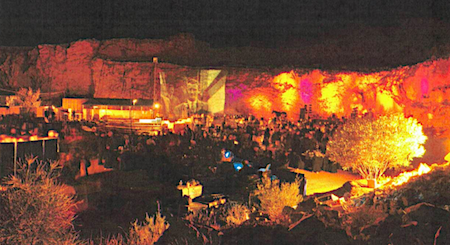 There is not a word from the town’s elected government about the impact of the project on The Alice: Will it make the town more liveable? Will it end the entrenched trend to smaller and more expensive residential land whilst being in the middle of millions of sparsely inhabited square kilometres? Could there be a demand for more such developments of generously sized blocks elsewhere in the municipality, more than half of which is uninhabited, with significant parts of it used for illegal rubbish dumping and reckless off-road driving?

These questions were not raised and so the general public was not meaningfully represented in a process that will be decided by a government minister in Darwin.

The Member for Namatjira, Labor’s Chansey Paech, provided this comment to the department: “I am aware of concerns within the rural community regarding this application, including the potential impact on the amenity of the local area and the lack of infrastructure currently in place to support this development, such as drainage and road networks.

“I also note that the proposed rural block sizes are not in line with existing rural blocks in the region.

“There have also been significant concerns raised by tourism providers who believe that this development could affect the region’s capacity for tourism.

“The Quarry, located on Stegar Road, is a valuable tourism facility in Central Australia. The loss of this site may cause providers to stop bringing tourists to the region and thus result in a significant drop in tourism revenue.”

Sacred sites custodians, through the Aboriginal Areas Protection Authority (AAPA), have imposed “designated areas” on several blocks “which implies a degree of property rights by future landowners,” according to one objector, Ragonesi Road resident Brooke Morley: “The subdivision as proposed relies on the inclusion of AAPA land to present a greater average lot size.” 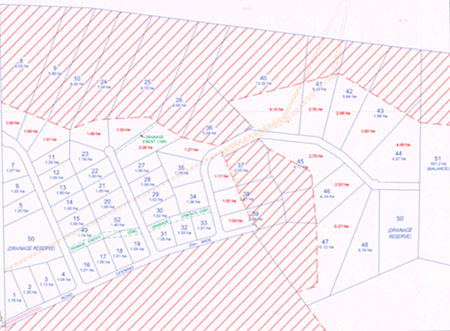 She says this land “is highly constrained which renders it essentially unusable [and] sees approximately 36 (72%) of all allotments proposed with an unconstrained land areas of approximately one hectare per lot”.

AAPA’s Authority Certificate defines areas (image at right, blue lines are the blocks, orange lines show AAPA land) within which “no work shall take place or no damage shall occur.”

Other concerns expressed by objectors were the failure of the development to fit in with the style created by existing blocks and dwellings to the south, as well as erosion and flooding risks.

Norm Gardner and Mr Lambley told the hearing the stormwater network would include a structure costing $1m managing water flow not only from the development, but mostly from neighbouring land as well.

The proponents commissioned an aerial survey measuring elevation to the accuracy of 50mm to find out which way water flows.

Mr Cramer, a former long-time resident of the adjoining land where his father Bert ran dairy cows and goats, addressed the hearing conducted via digital communication.

He spoke about the project’s conflict with current zoning; expressed fear that the area would become a dustbowl on the one hand and be scoured and silted by floods on the other; warned that the new land owners, exiting through “back gates,” would cause environmental damage, including with off-road vehicles; that parks authorities would have insufficient resources to control that; that weeds would be introduced and fire breaks would be inadequate.

He cautioned that regulations of the number and kind of animals allowed would not be properly enforced.

Mr Cramer made no secret of his profound distain for countless “experts” getting things wrong during his decades-long observation of town planning, environmental care and flood mitigation.

It came to light at the hearing that Aboriginal interests, together with the parks authority, are planning a walking trail from Jessie Gap to Emily Gap to Heavitree Gap in Alice Springs, skirting the area where the housing development is planned.

Declaration of interest: The author lives on a two hectare block in one of the farm areas.

When asked by the News to comment Mr Lambley provided this statement:

I understand many of the objections are filled with emotion, however, of the five dwellings currently on Stegar Road – myself included – have always known that a major development would eventuate because of public demand to live close to town in a rural setting.

Incidentally, only one of those is an objector.

Please remember that an approval of 156 blocks in that Rural Residential Zone was given by the Development Consent Authority some years ago with much smaller blocks of around 4000 square metres.

I have lived on a two hectare block as well for the last 20 years. I understand how much work they are to maintain and have had many friends leave their larger blocks as they are just too time poor to look after such a large area of land.

All of the blocks are over one hectare (10,000 square meters or over 2.5 acres in the old language) with 80% of those in the area zoned Rural Residential.

The others are quite larger blocks at the eastern end of the development, giving the residents the choice to either have 2.5 acres or a larger size.

There are already many blocks around the Ross Highway and Ragonesi Road area, and a large number out at Ilparpa of 2.5 acres.

Right throughout Australia there are thousands of rural sub-divisions that are one and two acres.

We as a developer have been approached by many who would be keen to grow up their families in such an environment, so close to town.

I also think that there is no reason that the quarry operation and the development can’t co-exist as apart from only two of the proposed blocks the houses along Baldissera Drive from aerial photos will be closer to the quarry.

It has been nearly 20 years since a significant rural development was constructed in the town with rural houses the most sought after, according to real estate statistics.

I think it will be a prestigious and sought after area to live for many.

Alice Springs as a whole would also benefit with a new housing boom of around $20m that hasn’t been seen in years.

About the nature walk planned by the traditional owners together with Parks and Wildlife between Yeperenye Emily & Jessie Gaps, we would be keen to link up with that along the AAPA lands that we haven’t incorporated in any of the proposed titles, an area around 6km long, as we border the Yeperenye Emily Gap Nature Park.

We invited Mr Cramer to make further comment. He provided this statement:

They are proposing Rural Residential blocks, a substantial number of them in a Rural Zone. Why do we spend so much time developing planning schemes?

The issue with this development, apart from the environmental damage, is that the maintenance of all these failures of design become expenses for all ratepayers, as per e.g. Heenan Road and Ilparpa.

Another issue is about constraints being put on the land by the Planning Scheme. When you get an undersize block for the zone, you get permitted uses that are inappropriate for the lot size.

This can be seen on many of the 50% size blocks in Ilparpa, and most of the blocks in Wangardi, nearly all of which are 20% of the stipulated size.

Norm Gardner claimed that most the blocks on Ragonesi Rd were undersize. Not true, those not zoned Tourist Commercial or the three del Giaco blocks rezoned RR, are all zoned RL, minimum size 2ha (5 acres).

The only undersize blocks are the two of Hatzimahales, and the tiny block between Tony Smith’s Workers Village and “Pumpjack”.

Currently there are no developed RR blocks in Alice Springs.

Del Giago’s permission must have expired, and RR are supposed to be the interface between urban residential, and Rural Living.

Let’s get the first one right under the Planning Scheme (both of which I did say), not just right for the developers’ business plan (which I think is was the Chair said).