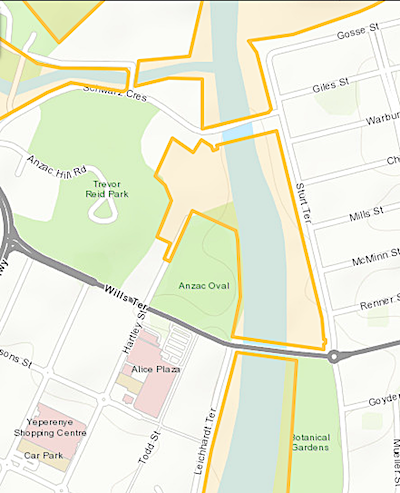 Front bencher Dale Wakefield says a letter of support from the native title organisation Lhere Artepe is giving the NT Government the mandate to build the national Aboriginal art gallery in the Anzac precinct, even if it needs to compulsorily acquire the rugby oval from the Town Council.

“We have gone through the proper consultation process,” Ms Wakefield told the Alice Springs News.

“Unfortunately what we have seen is political game playing by the Town Council who have not listened to the information.

“And when we do give them information they are changing the goalposts. I am hoping with this letter now we can re-set the conversation, but we are prepared to go ahead with compulsory acquisition.”

Ms Wakefield categorically denied that any financial or other inducements were offered to Lhere Artepe: “Absolutely not.”

She says Lhere Artepe has supported the Anzac Precinct “all the way through” including members who have “specific ties to that land”. The organisation’s three estates have provided the letter “to show their support”.

In the letter, delivered to the council yesterday, Lhere Artepe refers to the project’s “significant social and economic opportunities … benefiting the whole community” as well as job creation and tourism impact.

NEWS: Lhere Artepe is in charge of the native title determination area ordered by the Federal Court in 2000. Anzac Oval is not in that area (shown inside the yellow boundaries on the map).

WAKEFIED (at left): No. And they are not saying that in that letter. What they are doing is supporting the location as a broader body of traditional owners of the Alice Springs area. That determination under the Native Title Act was made some time ago. [They are giving their support] as an organisation I would say, with significant cultural authority.

[The Aboriginal Areas Protection Authority, an independent body, has issued a sacred sites clearance for the site.]

NEWS: Benedict Stevens is regarded as the most senior law man for the precinct. He is not a director of Lhere Artepe.

WAKEFIED: No, he is not. That’s my understanding.

NEWS: Has this decision been made under the exclusion of the most important person in the matter?

WAKEFIED: No, that’s not the case at all. There have been a range of other consultations. We have had recent and ongoing consultations with the Stevens Family and other key traditional owners. We are comfortable that we have majority support of people who speak for that country. Lhere Artepe would understand those people’s positions as well.

NEWS: You are saying Benedict Stevens was included. What was his position?

WAKEFIED: It is difficult at the moment because that family is in significant sorry business and I am really reluctant to speak on their behalf. We have kept them informed about all our steps.

NEWS: Before the sorry business started, has Mr Stevens given his green light for the location?

WAKEFIED: I am very comfortable that we have got support for that project. I am uncomfortable with putting pressure on individuals. You will never get a consensus view about this project from the non-Indigenous part of the community. Why should we expect it from the Indigenous community?

NEWS: Is this the break-through required to go ahead with the Anzac Precinct project including the compulsory acquisition of Anzac Oval from the Town Council?

WAKEFIED: The project is important for the whole community and the economic recovery of post-COVID. We have a Federal Government looking to invest in infrastructure projects. This is a perfect one to work on in collaboration with the Federal Government.

Note: Benedict Stevens was the lead signatory on a letter to the Town Council, dated 9 January 2019, that supported the gallery being built, but rejected the use of Anzac Oval as its location. The letter was co-signed by nine other senior Central Arrernte traditional owners, of the Stevens, Stuart, Rice, Sterling and Furber families. This followed a period during which Mr Stevens had publicly supported the gallery project for the Anzac site, appearing in the government’s promotional materials.