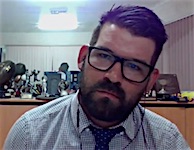 Deputy Mayor Matt Paterson (pictured) says he will always promote what’s “the best outcome for Alice Springs” after accepting preselection by Territory Alliance for the seat of Namatjira while still in his first term of local government.

He now joins Mayor Damien Ryan, who is standing for the CLP in Araluen, in his quest for a seat in Parliament.

Preselected Councillors can keep their local government positions until the election is called, and can regain them if they lose.

Asked what he would do meanwhile if the position of the council differs from the party’s, Mr Paterson said: “I don’t think it’s a problem. I will use Cr Paterson’s view. I never made my decisions in council on a political basis. I’ll continue to do that.”

NEWS: And what if the party disagrees with that?

PATERSON: That would be a party matter but whilst I am in the [council] chamber the decisions I make are what I think is best for the community. There will be no difference to this.

NEWS: When you were standing for council we asked you whether this would be a stepping stone to a political position.

PATERSON: I told you previously that I didn’t want to do it either. It definitely wasn’t a stepping stone. I had no ambition to be in council and I had no ambition to be a politician. But as it happened, I was approached by the community to run for council. That was that. I’ve [now] been approached by a larger proportion of the community to represent Alice Springs and Central Australia in Darwin to make sure our voices are heard, and we’re not continually an afterthought.

Under the Local Government Regulations, a by-election need not be held if a council vacancy occurs within the 18 months before general elections are scheduled. Councils may appoint a person to a casual vacancy or leave the position vacant in accordance with its policy.