Booze consumption went up after floor price came in 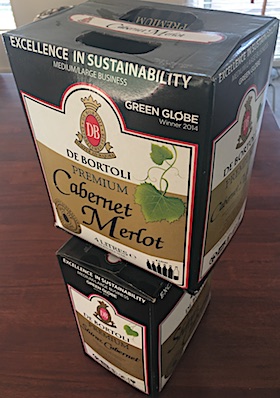 There has been an overall 1.2% increase in per capita consumption of alcohol at a retail level since the introduction of the $1.30 per standard drink Minimum Unit Pricing (MUP), also know as the floor price.

Four litre casks selling in Port Augusta for around $19. Their sale is banned in Alice Springs.

This is claimed by Andrew Wilsmore, CEO of Alcohol Beverages Australia, who says downward trends in harms had been under way well ahead of the introduction.

He says: “The popular two litre cask wine, which can be picked up in other Australian states for around $10, skyrocketed by 300% to now cost Territorians closer to $30.

“An additional two million standard drinks were consumed in the NT which highlights how spectacular a failure the MUP experiment has been, while taking millions of dollars from Territorians’ household budgets.”

While the NT Opposition wants the measure to be scrapped, the government says in a media release that a report by Professor Peter Miller from Deakin University shows the minimum unit price is “contributing” to the reduction of harms associated with alcohol.

This makes it appear that Mr Wilsmore and Minister for Health and Attorney-General, Natasha Fyles, are on the same wavelength.

She says: “Our strong measures across minimum unit price, bringing back the banned drinkers register and PALIs (cops at bottle shops) are responsible for these positive results.”

Says Mr Wilsmore: “A Banned Drinker Register was introduced a year prior in September 2017, and PALIs were introduced in regional centres three months earlier in June 2018.

“The most serious flaw in the report is assuming that the existing downward trend line for consumption and harms was attributable to MUP. You simply cannot take an existing trend and then claim it was a result of a policy change.

“The researchers compound these problems by asking us to take it on trust that their model can somehow separate out minimum pricing from a whole suite of other measures all occurring at the same time.”

Opposition Leader Lea Finocchiaro says in a media release that the floor price is “not much more than an inefficient price measure that punishes responsible alcohol consumers and increases regulatory burdens.

“This Government has failed to create key performance indicators or measure the success of the floor price in a way to avoid scrutiny of its failure. The Government’s approach is, if you don’t measure it, then you can’t fail. That’s wrong.

“Any positive effect on reduced alcohol consumption is taking place primarily because of the hard work of PALIs who were originally an initiative of the CLP.”