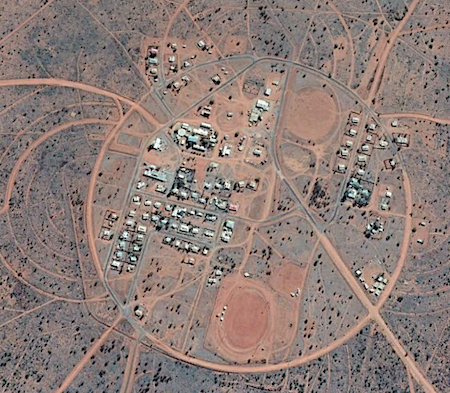 A man – his name is known to the Alice Springs News – from a small Aboriginal community in a “designated biosecurity area” west of Alice Springs declared under COVID measures was invited by the Central Land Council to attend a meeting in Alice Springs.

Yet an NT Government facility in the outstation has online facilities which would have permitted his attendance via Skype or Zoom, without leaving the remote community, according to a source speaking to the News on condition of not being named.

These facilities would have been available to the man, the source says, yet the man appears to have obtained a permit from the police in Papunya for the trip.

The man combined it with shopping in Alice Springs.

The permit enabled him to return to the community without undergoing 14 days of otherwise mandatory quarantine.

The News sought by email at 9.14am on Saturday a response from Health Minister Natasha Fyles, COVID Media and the police, but at the the time of publishing has received only an acknowledgement from Ms Fyles, but no reply to the questions we asked.

We have also made enquiries with the Central Land Council, who were of course among the Aboriginal organisations who successfully lobbied early for closing the NT’s borders in order to protect remote communities.

“If that virus gets into this community then it’s over,” says our source.

“The people don’t keep a safe distance, they all cluster together, play and touch each other, and it would spread like wildfire. We have to be really vigilant here.”

Messages about precautionary conduct, from washing hands to maintaining separation “has been reinforced strenuously” in the community.

The source says he has turned away from accessing government facility two people who had travelled without authority and had not self-isolated.

“My question was, why was that permit issued? For meetings? You can have meeting over a telephone or via Skype. You don’t need to be there in person unless it is for some crucial reason.

“And that wasn’t a crucial reason.

“I’m trying to uphold the law to prevent the spread of the Coronavirus. And yet others are not, and they are trying to hide behind permits. For me that is just unacceptable.

“I informed the Papunya police and my superior, both of whom said they would look into it.

“It’s up to them what they should be doing in terms of their authority. I’m just an ordinary person. I don’t have authority to do anything. So I left it at that,” says the source.

“I know of three groups of people who have moved between biosecurity areas without permission. Just gone.

“There are people to whom the message has not gotten through about why there should be a restriction on movement.

“I’ve been at pains to explain … why we should stay put and not mix with people from other communities.

“They understand it but even so, some of the community still move around, flouting rules for their own selfish purposes. It’s not good.”

Although the source has been issued a Temporary Approved Remote Essential Worker ID card, valid to June 18, to move within his biosecurity area, it is still not clear whether that entitles him to go to the Papunya Store (which is in the area).

“Things are changing all the time.”

The source says: “I don’t want to be caught and fined for travelling where I should not but for others it is of no concern. They do whatever they want.”