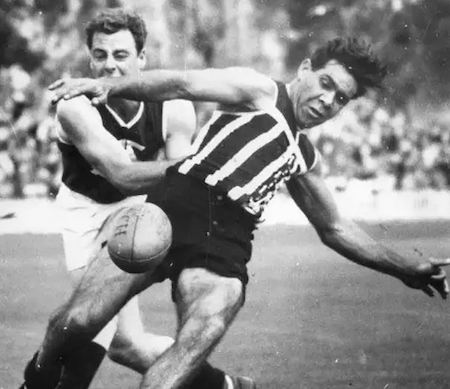 Indigenous talent has thrived at the Port Adelaide Football Club which has had 54 Aboriginal players since 1953. The club is turning 150 years old in 2020.

Richie Bray on the wing.

Some very exciting players on that list are modern stars of the 2004 Premiership including 1993 Brownlow medallist Gavin Wanganeen, Norm Smith medallist Byron Pickett, and the Burgoyne brothers Peter and Shaun.

It all began in the 1950s when Malcolm Cooper and Richie Bray, both Alice Springs boys, were the first Aboriginal people to play league football for Port Adelaide.

They both were residents of St Francis’ House at Semaphore South, where the opportunity to develop their sporting skills materialised.

St Francis’ House was started by Father Percy Smith in 1946 as a home where Aboriginal boys from the Northern Territory could live while having the chance to further their education.

Malcolm Cooper was the first Aboriginal footballer to play for Port.

He managed to play five games in the mid-1950s.

He was a half-back flanker and was also the first Aboriginal person to play in a Grand Final, which was the seven-point loss to West Torrens in 1953.

Port made the next six grand finals, winning all of them from 1954-59.

Later he was a founding member and first president of the Aboriginal Progress Association.

Malcolm met and lobbied Prime Minister Sir Robert Menzies in 1963 in Canberra as part of a delegation to promote justice for Aboriginal people.

John Moriarty, one of the many inspired by Malcolm’s achievements, picked up the baton.

John reflected on Malcolm’s potential and in a 1996 interview said: “People like Malcolm Cooper, who died very young in my view with a brain haemorrhage, while he was in Tennant Creek, he was flown up to Darwin, you know, he died before he got to Darwin, had a great deal of potential too to go on.

“Oh I think he was in his twenties or thirties, early, maybe early thirties.

“But Malcolm had a lot going for him too, and he was a good footballer. He played for Port Adelaide. But St Francis House was an exceptional home. If you look at the situation today and look back in retrospect.”

Richie Bray was the second Aboriginal footballer to play for Port.  He played one game in 1959 before returning to Alice Springs.

He returned in 1962 and played in his first Premiership combining explosive pace and extravagant skills on the wing when Port beat West Adelaide by three points in the Grand Final.

A three-time premiership player, Richie also played in the 1963 and 1965 premiership sides under coach Fos Williams.

He was on a half forward flank in the 1963 defeat of North Adelaide, and started on the bench in the 1965 Grand Final when Sturt was defeated.

Richie played 77 games for the club over a career spanning eight years. He spent most of his playing time on the half-forward flank, kicking 65 goals.

Later he coached locally at the Semaphore Football Club. He died in November 2017 and the club song was played at his funeral. Hs is survived by his wife Cynthia and daughter Kerry.

Wilfred Huddleston was the third Aboriginal boy to play league football for Port Adelaide and he came from Roper River in the Northern Territory.

Wilfred was tall and a very good marker of the ball. He was in contention to play in the 1963 grand final as per the old news clipping, but was edged out by Richie Bray.

There has long been an association between Central Australia and the Port Adelaide Football Club.

Traeger Park in Alice Springs has been a successful venue for Port.

In 2004, an AFL Regional challenge match between Collingwood and Port attracted a sell-out crowd of 10,000.

The venue hosted its first ever AFL Premiership match on May 31, 2014, with Melbourne going down to Port Adelaide by 20 points.

Port Adelaide is a club with a rich and celebrated history of Indigenous players and supporters.

The first Indigenous player to wear the jumper during a premiership celebration was Richie Bray.

Richie was selected as part of the SANFL’s Indigenous Team of the Century on the Half-Forward flank. 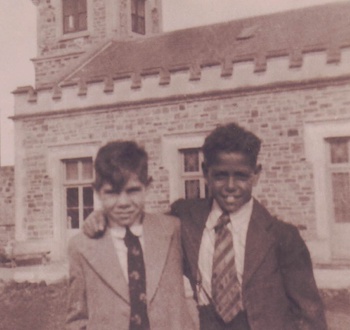 These three men paved the way for the other Indigenous players such as Fabian Francis, Shane Bond, Che Cockatoo Collins, Nathan Krakouer, Jake Neade, Patrick Ryder, Danyle Pearce and others.

Given the opportunity to live at St Francis’ House opened a pathway for Malcolm Cooper, Richie Bray and Wilfred Huddleston to show their prowess as first class Australian Rules footballers.

Indigenous Australians often possess a natural sporting talent, which has in recent years brought many of them to the top of their particular sporting professions.