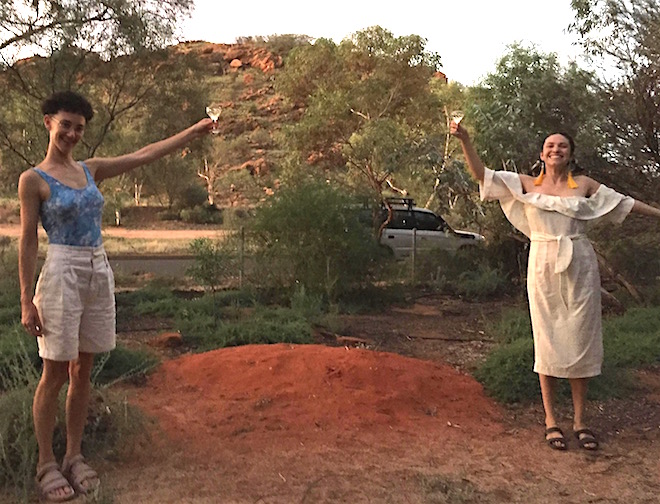 Above: Chair of the WTS board, Frankie Snowdon and outgoing director, on a high note, Zoya Godoroja-Prieckaerts, toasting their OzCo win  – “at a socially appropriate distance”.

With a $50,000 drop in income – due to the coronavirus shutdown – staring Watch This Space in the face, you can imagine the joy when the valiant small arts organisation heard they had received four year funding from the Australia Council.

For the first time its director will be paid a proper wage, although it’s actually a bit more complicated than that.

Outgoing director, after three years in the job, Zoya Godoroja-Prieckaerts has been paid for a four-day week when the job mostly demands a full-time commitment.

Jobs at the helm of small arts organisations are often held by artists and a part-time arrangement can suit them, if it’s genuinely part-time. So the Space made a submission for wages for two co-directors to each work four days a week and that’s what they got.

But what likely set their submission apart, says Godoroja-Prieckaerts, was their emphasis on being able to pay fees to their exhibiting artists, and to make a contribution towards their expenses, such as travel or materials.

Many arts organisations put all of their grant funding into their operations and rely on more tenuous project funding to pay artists if at all, says Godoroja-Prieckaerts.

“But it is an important part of our organisational values to pay artists properly.”

Their successful submission also provided for an annual creative project, with local artists, rather than the directors, paid to run it and bring its fruits to the community. 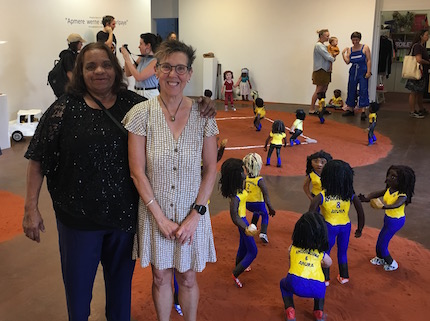 Funding to pay a First Nations advisory committee was also prioritised. This will be in the form of a consultation fee for First Nations input into decisions by the WTS board and the curatorial committee.

Left: Opening night at the last exhibition before the Space had to close its doors to visitors. Collaborators Margaret Palmer and Vicki Crowley with their tribute to the softball culture of Amoonguna. Reviewed here.

With many such demands made upon Indigenous people, especially in Alice Springs, being able to pay them for their time and knowledge is a way to ensure cultural diversity in the organisation, says Godoroja-Prieckaerts.

Their submission also gave an overview of all the different things the Space does: exhibitions, residencies, hosting studio artists, community projects, performances, events, working with other local organisations and groups.

“I think that was probably a factor, being able to do so much with so little,” she says.

“We will make this money go a really long way.”

It will also offset the money lost – an estimated $50,000 – due the the shutdown: the money they normally raise from studio rents, from bar sales at show openings, from fund-raising events, sale of merchandise and memberships.

“It’s really hard to promote membership when there is no live program.”

While the Space feels “very honoured” to be chosen, they also feel for the organisations who have missed out, including some in the NT like Tracks Dance Company, based in Darwin, but working with other communities, in recent years particularly Lajamanu.

The Space fully accept the reduction of their funds for the first year to 70% of what they asked for in order for the organisations that are being defunded to get one more year of funding at 70% to help their transition.

Nationally, in the sector, there has been an outcry over the reduced overall distribution and some of the choices made by the Australia Council.

It has been described as “a cultural bloodbath” by Australian writer Ben Eltham, who deplored, at this time especially, the defunding of  the Sydney Writers’ festival; many of the nation’s literary magazines, including Australian Book Review, Overland and the Sydney Review of Books; and a long string of theatre and dance companies.

To that list, as an arts writer, I note with dismay, the defunding of the visual arts journals, to which I sometimes contribute, Artlink, Art Monthly Australasia, and Eyeline.

Godoroja-Prieckaerts agrees, worried for the way this will undermine critical culture in the visual arts and for the impact this will have on artists’ awareness of what one another are thinking and doing.

Below: The Alice Springs Pop Choir, who BC (before coronavirus) rehearsed at the Space, celebrating the year’s end at the annual Lofty Awards in 2019. Report here. 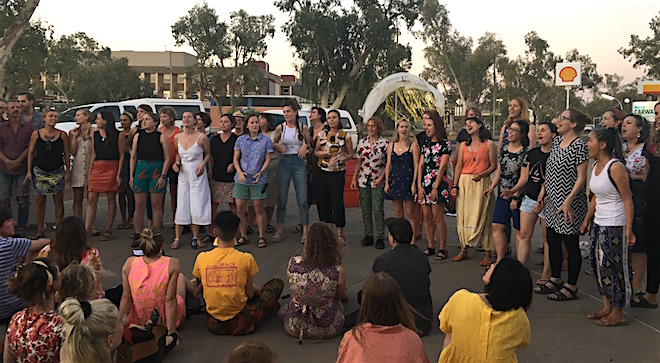