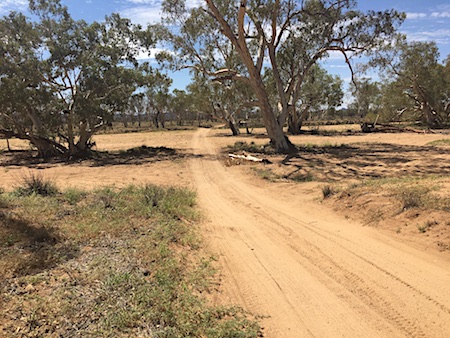 There are at least two back doors out of Alice Springs enabling people to access bush communities declared “designated biosecurity areas” while avoiding the 14 days quarantine mandated.

This exposes populations throughout the region to the COVID-19 virus. Because of living conditions of many in Aboriginal communities this is broadly feared to have catastrophic consequences.

Amoonguna adjoins the municipality of Alice Springs to the east.

A local elder says bush roads connect it with Santa Teresa and from there to Titjikala, Finke and potentially to all communities in the southern half of the NT.

Regulations permit free access to Alice Springs because it is not a designated area but travellers from town to communities – including their residents – must first go into quarantine.

Amoonguna can be reached via the Ross Highway where – unlike on the northern, western and southern access roads to Alice Springs – there is no police roadblock.

Or it can be reached via the South Stuart Highway, turning east into Colonel Rose Drive, just short of the police checkpoint at the Welcome Rock and the Adelaide turn-off.

Form there the road and later a bush track lead to a Todd River crossing, much used judging by the tyre marks.

Is Amoonguna a designated area?

The Alice Springs News  put that question to the police, Health Minister Natasha Fyles and COVID Media in an email at 8.17am on April 6.

We received no reply, unless sending us a link to the map (partly shown here) of the southern NT is meant to answer our question.

The dot (pictured) representing Amoonguna being of the same colour as other designated areas seems to make it clear that community is one as well.

The community, of some 275 residents, mostly Eastern and Central Arrernte speakers,  is located just outside the Alice Springs Municipality, according to the MacDonnell Regional Council website.

In 15 minutes yesterday afternoon the News observed four vehicles at the turn-off to Amoonguna from the Ross Highway, going into or coming from the community, including a taxi. 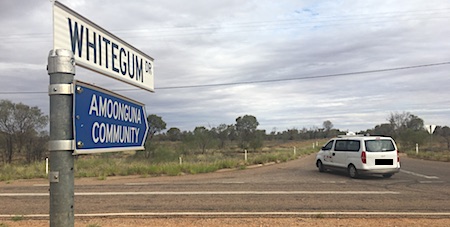 The taxi operator, Samih Bitar, says the requirements with respect to Amoonguna have not been made clear. His drivers do not go into quarantine.

His company treats Amoonguna as they do the Alice Springs town camps (which are inside the Municipality of Alice Springs).

“They don’t have a store so they have to come into town shopping,” says Mr Bitar.

“What we have been told [by the authorities], we are doing.”