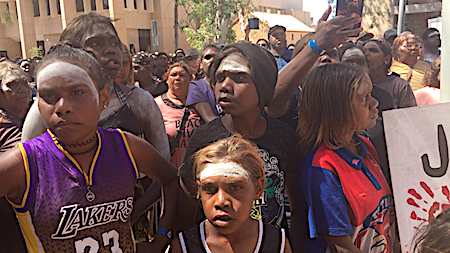 Progress in the case being brought by NT Police against their officer Zachary Rolfe for the alleged murder of Kumunjayi Walker in Yuendumu on November 9 last year has been further delayed, at least in part, by the Coronavirus shutdown.

In a hearing this morning in Alice Springs Local Court, essentially closed due to the virus restrictions, Judge John Birch expected to be served with the prosecution’s brief.

A copy on a hard drive had been delivered via TNT Courier yesterday, but that was not acceptable to Judge Birch. Despite its voluminous nature, His Honour wanted a printout and wasn’t going to have court staff downloading it or copying it.

Even if it had been printed, many elements are still outstanding, explained Collette Dixon for the DPP, as she requested a 10 week adjournment.

The autopsy report is to hand, but she is still waiting for “further medical and forensic material from various experts”.

Judge Birch asked her to be more specific. She obliged: an additional pathologist statement; urine toxicology results; examination of items used during the treatment of the deceased at Yuendumu; a biomechanics’ expert report, dealing with things like the capacity of the deceased to undertake [prior to his demise] particular actions, given his body position; another statement from an expert regarding video enhancement of the body-worn footage; and a statement from a clothing examiner from the AFP.

In addition, she is waiting for a medical statement from a doctor relating to the wounds of Mr Rolfe and his fellow officer on the scene; a firearms examiner’s report; and “a few other police statements”.

And why is it taking so long? Judge Birch wanted to know.

In the case of reports from the hospital, Ms Dixon expected that they have possibly been put  “on the backburner because of COVID-19”. This is what the DPP have been told in relation to “serious harm-type statements [for other cases]” – ”they will be done as they can get done”.

David Edwardson QC, appearing for Mr Rolfe, and his instructing solicitor were not yet on top of even the material on the hard drive, delivered to them on 30 March. He gave an idea of its magnitude: 161 statements, 256 annexures, plus multiple body video footage.

“And we know that there is certainly a great deal of further material, as has just been identified.”

The matter was adjourned to June 25 at 10 am for a further preliminary examination mention – an opportunity to “come back and see what the state of play is”, said Judge Birch.


Note: With media unable to attend the hearing, the courts distributed a transcript, upon which this report is based.