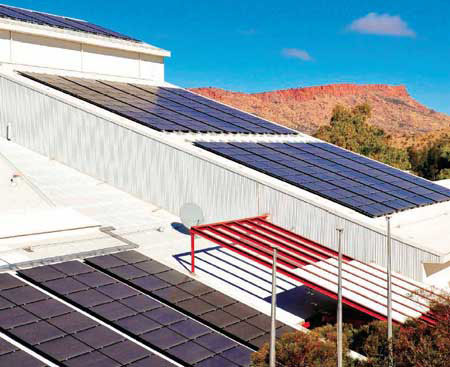 The Opposition says the NT Government has “sneakily dropped the Feed In Tariff from 23.68 cents per kWh down to 8.3 cents”.

The Feed In Tariff is the amount paid by the government’s electricity system to owners of rooftop solar arrays who sell excess electricity into the grid.

The change means that the government will be charging for power three times as much as it will pay for it.

Opposition Leader Lia Finocchiaro says the reduction was brought in without consultation “on the weekend while Territorians were still trying to adjust to the biggest changes in their lives with COVID-19″.

However, the changes apply only to Feed In Tariff agreements made after April 5. Earlier ones will continue to receive the 23.68 cents per kWh, but this will end when a property ownership changes.

The changes will sharply reduce the public’s incentive to invest in private electricity generation.

“There was a complete lack of consultation with Territorians or solar providers on this change and no provision has been made for a grace period which would allow homeowners who had planned to install solar to finalise their in process applications before this change came into force,” says Mrs Finocchiaro.

Meanwhile the government’s Jacana Energy says the solar feed-in-tariff rate was the same as the usage rate paid by a customer purchasing electricity from the grid, a one-for-one rate.

“Jacana Energy is the only retailer in Australia continuing to offer a feed-in tariff at the current premium rate of 23.68181 cents per kilowatt-hour for both residential and business customers who have installed a rooftop solar PV system up to 30kW in size.

“Solar feed-in tariffs in other jurisdictions around Australia generally range between 6 and 16 cents per kilowatt-hour.

The Country Liberals (CLP) does not have a current renewable energy policy, according to an Opposition spokesman, but is planning to announce one “in a couple of months”.