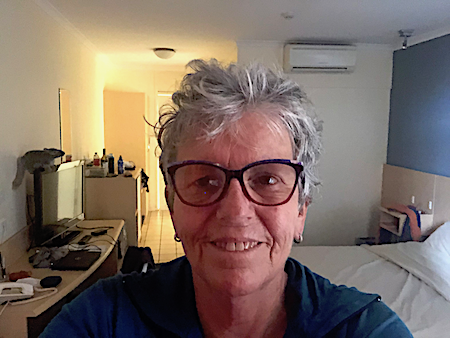 By ERWIN CHLANDA with JULIUS DENNIS

Jocelyn Davies (selfie at right) transforms her room in the Aurora Hotel into a bedroom, a living room, a yoga room and a hobbies room as required, by moving around the queen size and single beds.

The hobbies are wooden spoon carving and personal family research.

She is keeping fit with “PE with Joe” videos on youtube and yoga.

She can see Flynn Church if she goes outside the room, for which she needs special permission and has to wear a mask and avoid other people.

The well-know scientist is in compulsory COVID-19 lock-up for two weeks.

“The written instructions from the hotel and the verbal instructions form the police are quite clear: I am not to leave the room,” she says.

She needs to communicate with reception which has some discretion about her movements, such as being allowed to use the guest laundry and picking up things dropped in by friends.

From her room window she can see “a little bit of sky, a couple of trees near the Todd”.

Overall she feels “very safe” in her room.

Having just returned from a three months car trip she’s looking at it on the bright side: “This is not a bare bones hotel room any more.

“I moved my tuckerbox and my car fridge into the room. There are knives and forks.”

Her food left over from the trip is supplementing the somewhat Spartan eating routine: “Options for the food are pretty limited: One type of breakfast, one lunch (“white bread, devon and wilted lettuce sandwiches”), but a choice of several dinners.

The staff are “doing their best in a tough situation,” says Dr Davies.

When she arrived in Alice Springs the police told her which hotel to go to, saying they would be expecting her: “They didn’t seem to. They’d clearly had a long day.

“Everything seems to be in the hands of the staff. The police say they will be checking to make sure [she was obeying the quarantine order] but the staff are doing checks when they deliver the food.”

Dr Davies thought she was to be briefed by Family and Welfare NT on arrival but she was not.

She has since spoken to them twice but she had to initiate it. She has now agreed to ring them when she needs them. No worries, she says.

New sheets are offered after a week and all other amenities are on request.

Almost everyone at the Aurora is in quarantine, it seems.

Dr Davies was not very happy with the room she was given and asked if she could move.

“Initially they said ask in the morning. The next morning I was told I could not move because they were full.”

She was also told that others were in “worse rooms”.

“I decided in my mind it is a wonderful room. It’s all a matter of attitude,” says Dr Davies.