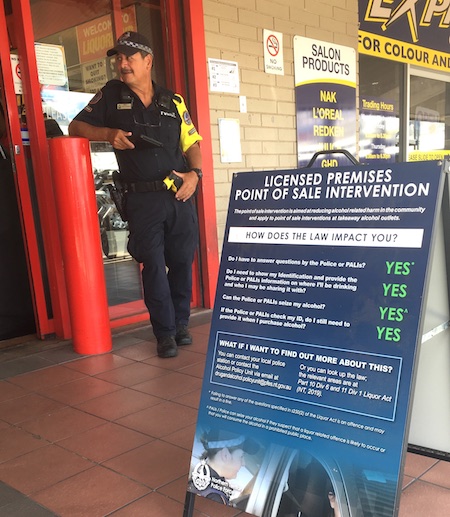 The NT Government will pay for the 14 day quarantine – likely to be at a hotel – required by people from remote areas returning to their communities.

Independent Member for Araluen Robyn Lambley says she was told this by Police Commissioner Jamie Chalker during a briefing this morning.

Cops at bottleshops were alerted to the $750 “hardship payment” due today.

Chief Minister Michael Gunner told media yesterday that the approximate cost of the quarantine at $2500 per person for accommodation and meals.

Meanwhile Independent Member for Stuart Scott McConnell says people on benefits coming into town with $750 extra money in their pockets are likely to “get stuck” here.

And Minister Dale Wakefield, MLA for Braitling, has not responded to questions from the Alice Springs News. We will report her answers if and when we receive them.

Ms Lambley says she put this question to Comm’r Chalker: With people on Centrelink pensions and benefits about to receive their one-off $750 hardship payment (Economic Support Payment, due today) what is being done to prepare for people from “designated areas” travelling into town to shop? How will the two week quarantine requirement be implemented for people travelling from Alice Springs back to their communities?

Ms Lambley says Comm’r Chalker told her that the remote stores have been asked to provide stock for people to purchase so they don’t need to travel into Alice Springs.

The police have implemented Biosecurity check points monitoring people moving in and out of communities.

Education has been done with people living in remote areas and police are confident that people understand the risks associated with travelling in and out of the designated areas.

Comm’r Chalker believed most people from remote communities would not leave their communities despite the $750 Centrelink payments.

Liquor licensees and PALIs have been told to be vigilant in ensuring that only people with local addresses are served take away alcohol.

In the case where people decide to come to Alice Springs and then want to return to their communities, they will be made to quarantine for 14 days in a facility identified by the NT Government.

Ms Lambley said she asked who will pay for the cost of quarantining for these people – will it be them or the NT Government?

Are there still groups of children and youths gathering in the CBD of Alice Springs at night?

Comm’r Chalker said that over the weekend there were groups of kids on the streets at night, some of them “youth offenders”.

He said that the police and Territory Families staff were continuing to work with the children, their parents and carers to educate them on the risk that this behaviour poses.

He said that the police removed youth offenders from the streets.

“I am asking people from remote communities, for their safety, to please stay home,” says Mr McConnell, independent MLA for the rural seat of Stuart.

He says he’s “holding his breath” to see what will happen when the NT Government stops paying for the isolations, from midnight on Friday, and the people being quarantined have to pay for it.

He’s wondering where the confinements will take place (possibly at a hotel), and what will happen if the people quarantined cannot or will not pay the cost.

Mr McConnell says the government has provided him with very little information.

It’s for that reason that Alice Springs cannot be declared as a designated area, he believes.

As things stand, Amoonguna for example, some 10 minute’s drive from the Gap Store, is a designated area and people returning there from town would each time need to be in quarantine for 14 days.

Meanwhile Minister Wakefield has not responded to these questions the News put to her at 8am this morning:

• The World Health Organisation says the key in fighting COVID-19 is “test, test, test”. How many tests have been carried out in Alice Springs?

• What were the results?

• Is there a testing station accessible to the public in Alice Springs and if so, where is it?

• It has been revealed that our “border control” has failed to prevent vehicle traffic from SA from proceeding north through Alice Springs to points further north, including Darwin. These travellers were acting in contravention of the rule that they “must self-quarantine at the nearest available suitable accommodation”. Your comment, please.

• People are permitted to travel from bush communities to Alice Springs without undergoing 14 days of self-isolation because it is not a “designated area”. However, if their home communities are “designated areas,” quarantine is mandatory before the person can return home. How will that be enforced?

We also asked her further questions about managing the quarantining of remote area residents, the answers to which are covered by Mrs Lambley and Mr McConnell above.