Gunner the statesman short on facts for Centre

Above: Timely message on an Eastside fence in Alice Springs.


In an extraordinary 1691 word statement today Michael Gunner slipped into the role of the great statesman: “But if I didn’t make these hard choices to save lives, I could never forgive myself. This is not the end – in coming days, I’ll have to ask even more of you.”

Winston Churchill, move over with your paltry “blood, toil, tears and sweat”.

There was more, much more, delivered in front of Darwin media.

While considerable time and effort went into communicating this largely rhetorical speech, in which Mr Gunner claimed big lots of kudos for major decisions made at Federal level, what he did not do was answer some basic questions: While Darwin media received responses, our questions on vital matters related to the virus threat in the Centre have gone unanswered:

How many people have been tested?

According to the NT Government’s advice only people with symptoms need to be tested, but other countries have adopted more aggressive testing – see below.

This issue was also raised by one of the Darwin journalists, putting to  Mr Gunner that the NT’s testing was constrained by the availability of the test kits, and not based on the best medical advice.

Mr Gunner answered that he was taking his advice, including on the availability of resources, from the Chief Medical Officer: “We do what we can with what we’ve got,” he said.

See update at bottom, relevant to the above issue.

How many isolation rooms are available?  Where? 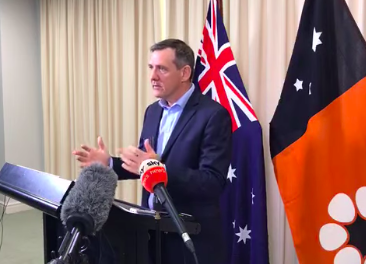 Mr Gunner referred to the Inpex workers village but what is the comparable facility in southern NT?

How will isolation be enforced?

What will people entering the NT be told to do?

How will it be monitored that these instructions are followed?

What will happen to people who do not follow them?

How many beds are there for acute cases?

No awnsers to these questions.

The ABC’s Jane Bardon noted the existing 18 ICU beds and asked about the NT’s ability to scale up.

Mr Gunner said the NT will be able to access the National Critical Care and Trauma Centre (based in Darwin) and significant Defence resources. Again, nothing specific to the southern NT.

Will communities with known cases be locked down?

How will acute patients from remote areas be transported to hospital?

Do we have adequate facilities and equipment and staff to do this?

Have police assigned to borders got all the personal protection equipment they require?

This is an issue being raised by the NT Police Association. It was not addressed at the media conference but there was discussion of sufficient resourcing for policing the borders. Mr Gunner said the Territory will also be able to draw of Australian Federal Police and defence resources for border patrols and welcomed the cooperation with the NT’s neighbouring states. (WA and SA are also closing their borders from tomorrow.)

What has been and is being done to trace airline passengers on the Darwin flights carrying infected people?

The ABC’s Jane Bardon put to Mr Gunner that all incoming passengers from interstate, some 2000, be required to self-isolate as a precaution. That will be enforceable from tomorrow, said Mr Gunner.

The NT’s coronavirus pages identify three flights that are being traced, asking people who were on them to call, but does not explain what other actions, if any are being taken.

The Alice Springs News put this to Mr Gunner’s department which runs SecureNT, dealing with the COVID-19 pandemic, on March 19 and we still don’t have reply:

Apart from rigorously controlled essential services workers, are people able and permitted to move between urban, rural and remote centres in the NT at their discretion?

At the head of the reply Secure NT said “yes”.

That appears to conflict with a paragraph lower down in the reply which says: “Remote communities in the Northern Territory have been closed to all non-essential travel in response to concerns about the spread of COVID-19.”

There is no specific advice on the NT Government’s coronavirus pages regarding travel out of and between remote communities.

Our questions follow closely statements made yesterday in an interview by the ABC’s Insiders with Professor Ben Cowling (pictured), from the University of Hong Kong, who detailed measures by countries doing much better than others in the control of the Coronavirus.

He said, in part, “they are doing a lot of testing and are very good at isolating cases and quarantining their contacts, so from the known cases we can stop the chains of transmission.”

ABC: Is this more important than shutting down schools and work places?

COWLING: In Hong Kong and Singapore we have seen we need both types of measures … we need some degree of social distancing, because there’s always cases we don’t find.

ABC: When you say a lot of testing and tracing, what does that involve?

COWLING: When we find a confirmed case, looking at who they’ve spent maybe more than 15, 30 minutes [as would have been the case with the flights to Darwin] … in a closed location, and then getting a list of those names, tracking those people down, and then in Hong Kong giving quarantine orders to those people. They need to go to quarantine camps or maybe a hotel or home quarantine for 14 days. It seems really strict but that kind of measure can really help to stop onwards transmission.

Prof Cowling says some of these facilities are former holiday camps but now “all closed off [so people] are out of the community.

“We think of these as draconian measures at the community level, but what we are trying to prevent in Hong Kong and Singapore and some other places is having to resort to the kind of very draconian lock-downs of entire cities or regions like we saw in China and northern Italy and now some of the United States.”

These are the issues we are asking the Chief Minister to deal with, giving specific, detailed and sober information.

China did not include asymptomatic positive cases – 43,000 of them – in its statistics for coronavirus infections. This means that conclusions based on Chinese statistics, that downplayed the proportion of cases that are asymptomatic and their possible contribution to the spread of the disease, are in doubt.

This is being reported by The Australian’s China correspondent, drawing on an article in the South China Morning Post.

It has implications for containment strategies which focus on testing people who are showing symptoms, as is the case in the NT.

“A joint study by experts in China, the US, Britain and Hong Kong estimated that mild and asymptomatic cases were the source of infection of almost 80 per cent of documented cases found in Wuhan before it was locked down on January 23,” says The Australian’s report.

The decision to not include asymptomatic cases was made after 7 February, significantly reducing the number of new infections China reported.