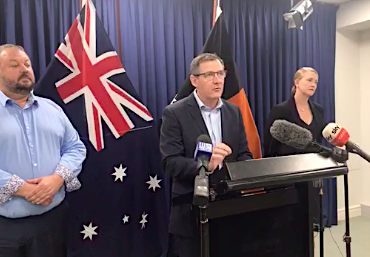 At 6am today I checked the SecureNT Facebook page and here still was the 36 minute and 8 second video of the Chief Minister that was 17 hours old when I had checked it the morning before and, upon a 10 minute or so viewing, it had left me in no doubt that this was as much election propaganda (cash for businesses struggling under the pandemic, and so on) as it was practical information on the health crisis.

Does anyone have 36 minutes and 8 seconds at 6am on a weekday for watching a politician talk?

Yesterday’s work began in earnest by sending an email to the Department of the Chief Minister SecureNT at 7.42am, asking: “Apart from rigorously controlled essential services workers (who obviously can do so), are people able and permitted to move between urban, rural and remote centres in the NT at their discretion?”

Overcrowded housing and frequent close contacts in Aboriginal communities are bound to be key factors for the spread of COVID-19 if it gets into those communities. With hand-washing the number one protective practice recommended by health authorities, poor hygiene is another.

The response from DCM.SecureNT started with the word “Yes”. This meant, I assumed, that, yes, people could move unhindered between places of habitation.

This was followed by 411 words of nothing new, but ended with: “NT remote communities have been closed to all non-essential travel in response to concerns about the spread of COVID-19.”

This statement appeared to be in conflict with the “Yes” and I drew this to the attention of DCM.SecureNT. They did not reply.

It would seem to mean that outsiders without an essential reason cannot go to bush communities while their residents are free to circulate, including to the regional centres such as Alice Springs.

Meanwhile the Combined Aboriginal Organisations of Alice Springs (COA) were calling for the NT to “become a Special Control Area for COVID-19 or else there will be a lot of preventable deaths.

“This means that we want to apply the same travel restrictions that apply to international visitors nationally to visitors to the Northern Territory from any Australian jurisdiction.”

So, visitors – or returning residents too? – coming into the NT, by whatever mode of transport, would have to go straight into a two-week period of self-isolation.

The restrictions on movement within the NT, however, are not expected to apply to residents of bush communities. Says the COA statement: “Aboriginal people move in and out of our regional centres all the time for life saving health care, to get back on to Centrelink payments and to buy food at affordable prices. This will not just stop overnight. We have to make sure that the regional centres in the NT are also protected in order to protect our remote communities.

“Apart from the inability of the health system to cope, our communities cannot suddenly overcome the additional susceptibility to this infection due to underlying chronic diseases, overcrowding, lack of food security, inadequate income and many other social determinants that will see this virus become a ‘super spreader’ if allowed in. There is no immediate fix to these issues.”

Lockdown of communities, with the provision of support to them that is required, is apparently not to be considered.

Is the government going to adopt the COA’s demand for travel restrictions to the whole of the NT?

Mr Gunner indicated on ABC news last night that he is looking into whether he has the powers to do so.

Another day had gone by as Italy’s death toll surpassed China’s and as Australia’s infections continued to climb.

This morning the Aboriginal Medical Services Alliance (AMSANT) has come out in support of the COA, calling for the entire NT – and the tristate region, taking in remote areas of WA and SA – to become a Special Control Area.

“New Zealand and Tasmania have led the way in forward-thinking, decisive action to fight this virus. We must follow their lead,” says AMSANT CEO, John Paterson.

“The recent spike in numbers of confirmed cases in other jurisdictions, particularly NSW, Queensland and Victoria, points to an exponential growth of spread. Yet the NT remains without any cases. This offers a narrow window of opportunity.

“Our Aboriginal population comprises the most vulnerable group in Australia and the projections for the likely health impacts of COVID 19 are nothing short of devastating.

“The [Swine flu related] H1N1 virus in 2009 resulted in death rates amongst the Aboriginal and Torres Strait Islander population six times that of the non- Indigenous community and the need for ICU beds around eight times more.

“The risk factors for COVID 19 are greater and hence the impact is likely to be higher than for H1N1.”

Meanwhile the Alice Springs Show will not be held this year.

Acting President Murray MacLeod says: “For the last 60 years, the show has celebrated the best of our community through competition, gathering together and celebrating our pastoral heritage.

“This year the best way that we can support the local community is by closing our gates.”

Today, the National Cabinet has given in-principle agreement for the Commonwealth Biosecurity Act to be used to restrict travel into and out of remote communities.