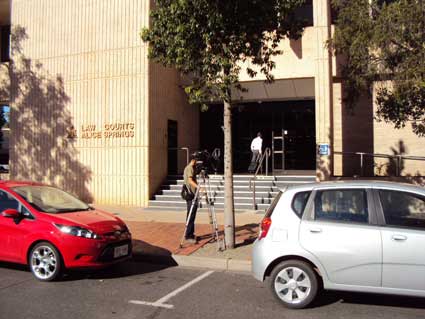 Responding to the threat of the coronavirus pandemic, the NT Local (formerly Magistrates) Court is continuing to take measures to reduce the movement around the NT of people involved in the justice system.

A major change to court procedures announced today will be that people arrested in remote areas who are not given bail by police or by an on-call judge will be held in custody in their communities rather than transported immediately to the major centres while they await their next court appearance, which will be on the next business day.

That court appearance will be via telephone or video-link, in an effort to reduce unnecessary movements in and out of remote communities.

Defendants currently on remand will be dealt with in major court centres, with witnesses appearing via video-link or telephone.

Chief Judge of the Local Court, Elizabeth Morris, said the new measures were an important way the Local Court could help prevent the spread of the Covid-19 virus.

They have been adopted after dozens of stakeholders in Darwin, Katherine, Alice Springs, Tennant Creek and Nhulunbuy  held a virtual-meeting this week.

Hearings at circuit courts, known sometimes as ‘bush courts’, remain cancelled until May 1, with the exception of Tennant Creek, as previously notified.

“The NT Local Court takes seriously its duty of care to those appearing before it and its responsibility to play our part in keeping the community safe,” Chief Judge Morris said.

“The courts are keeping a close eye on events locally and elsewhere and reviewing procedures as needed,” she said.

In an effort to limit the number of people attending court in person, some court matters will now be dealt with electronically, with measures for electronic filing, and appearances via telephone and AVL being fast-tracked.

The NT Local Courts have hand sanitiser available and put signage in courtrooms about hygiene and social distancing.

If anyone is in doubt about what is happening with their Court matter they should ring the closest Court registry.

Meanwhile, the Supreme Court has determined to conduct matters by audio-visual or audio link where possible and practicable.  There has been no change at this time concerning the conduct of jury trials.

Both the Supreme Court judiciary and Court Services are monitoring the situation and the advice from government medical services.  Further changes to the current listing schedule will be made should that become necessary.

For the time being, public access to the courts is unchanged.