Finocchiaro to talk about jobs in onshore gas

Sir –  I will be discussing the economic and job opportunities of developing the Northern Territory’s onshore gas industry with Federal Resources Minister Keith Pitt at a meeting in Canberra today.

The Beetaloo Basin represents an enormous opportunity in shale gas development that could bring thousands of much needed jobs to the Northern Territory. The sub-basin has an estimated 178,200 petajoules of gas.

The Federal Government’s Exploring for the Future Program has been investigating the potential of gas resources in the Beetaloo and Barkly region, while late last year the first drilling in the Beetaloo since the lifting of the moratorium recommenced with the spudding of Origin Energy’s Kyalla 117 well.

The opportunities in growing the gas industry are exciting for the Territory and that the CLP is steadfast in its belief that onshore gas is critical to growing our economy.

“I have clearly committed that a future CLP Government will implement all 135 of the Pepper Inquiry recommendations to ensure a robust, well regulated onshore gas industry. 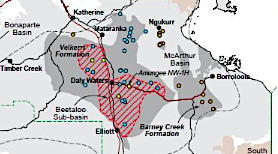 Minister Pitt has the enthusiasm to help develop these resources which have the potential to provide prosperity, not only for the regions but also Darwin.