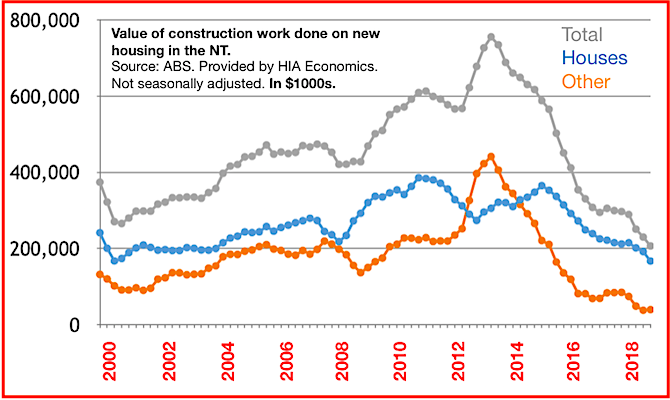 Value of construction work on new housing in the Northern Territory plunged into a precipitous decline about five years ago, losing three quarters from its almost $800m peak around 2014 to finish at $200m last year.

The figures (see graph) are from the Australian Bureau of Statistics and were released by the Housing Industry Association (HIA) Senior Economist, Diwa Hopkins.

Says Archie Wright, HIA Regional Executive Director, Northern Territory: “Multi-unit starts in the 2018/19 financial year were half that of the previous financial year and the lowest financial year in records dating back to 1984.

“It is important to note that there are international factors adding significant risks to the downside. As these effects are still emerging we have not factored them into our forecasts,” says Mr Wright.

Ms Hopkins says nationally the credit squeeze and its impact on home building “weighed heavily on Australia’s economy in 2019.

Elsewhere the value of work done on new housing increased: In Victoria there was a tiny increase of 0.1%, but significant ones in Tasmania (5.4%) and the Australian Capital Territory (9.6%).