The public gallery was unusually full at last night’s Town Council meeting, not packed, but well attended. Public question time soon revealed the visitors’ purpose – and an interesting glimpse into the range of views held in the community.

Some were concerned about the upcoming FABAlice Festival, promoted as a three-day “rainbow festival in the beating heart of Australia”, with “spectacular drag, comedy and cabaret performances and events”.

These will include “a Drag Crawl, Painting of the town, a Festival Pageant, Drag Races” and more.

Others were focussed on the fate of Julian Assange, Australian citizen, publisher and whistle-blower, facing extradition proceedings which commenced yesterday in the UK. The application comes from the USA where Assange would face trial on a range of charges under the Espionage Act, carrying penalties of up to 175 years in gaol.

The numbers fell roughly evenly, with four people from each camp coming to the microphone to express their views and ask council to respond to them.

In the middle of all that, and most unusually, an Aboriginal man who seems to be sleeping rough in town, also came to the microphone to ask about council rangers taking blankets from campers (a practice that attracted a storm of controversy in town and around the country in 2009; see our archive for multiple articles, including here.)

For this man, the rangers are “doing wrong”, some people are sick, it is a “worry when they have nowhere to stay”.

Council’s communications officer took his details for the CEO to follow up with him.

The CEO would follow up also with those who are worried about FABAlice and object to council’s support for the festival. 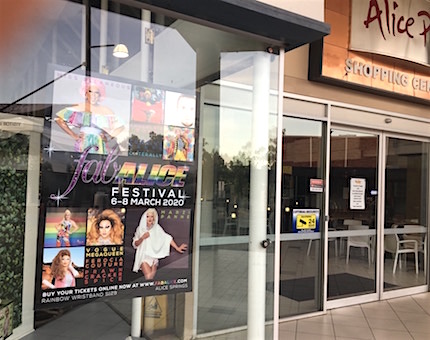 One young man said he was concerned about the path it leads our community down “in confusing children and families” and “dividing families”.

Left: FABAlice posters are on display in many locations around town.

A woman asked why council is using ratepayers’ money to expose young impressionable children “to this overly sexualised parody of women in the form of drag queens”.

Her concern was particularly about a parade featuring such performances.

The Alice Springs News has contacted the festival organisers to ask whether drag queens will feature in a public parade.

A man asked whetherFABAlice could be contravening council by-laws about offensive and indecent behaviour.

Another man asked whether any commitment had been made to readings by festival participants in the public library.

Acting Director of Community Development said an approach had been made to the library but a response had not been confirmed. (The News will also follow up on this.)

Members of the Julian Assange Supporters Alice Springs (JASAS) action group were keen to make the case supporting their petition, a motion about which council would vote on later in the meeting.

The petition asked council to write to the federal government, urging them to demand the release of Assange and arrange his repatriation to Australia.

It is a human rights issue, one man argued.

Council has confirmed its support of the Universal Declaration of Human Rights, as reflected in its policy 114. Supporting the JASAS petition would be consistent with that policy and a “demonstration of humanity and goodwill”.

Other councils have supported actions in support of Assange, he said.

A woman wondered if council had thought about what Assange’s situation means for freedom of speech and journalism as well as his human rights.

Another woman pointed to the impact of his having released information on Wikileaks about war crimes in Iraq.

Many governments don’t want the truth released, she said, but it is important for all of us as citizens in a democracy.

If Assange came from Alice Springs, she wondered how councillors would vote. Many have said he is a difficult person, but he’s “our difficult person and we want him back”.

Founder of JASAS, Margaret Richardson or Mags as she likes to be known, referred to the prosecution of  American whistleblower Daniel Ellsberg. Charges against him were dismissed (in 1973) when it was revealed that illegal evidence gathering against him (the Watergate scandal) had “incurably infected the prosecution”.

She said similarly the case against Assange should also be dismissed and in this light she hoped council would carefully consider support for the JASAS petition.

When the motion relating to the petition came up for debate, Cr Eli Melky again left the room, due to what he sees as a  conflict of interest – he has American clients.

Mover Councillor Jimmy Cocking said the petition was not anti-American (as Cr Glen Auricht had contended at the committee meeting), it was rather pro-Australian.

Assange is a whistle-blower and such people are important, he argued, for Australia and the international system of laws and rules to which we subscribe.

He thanked all of the supporters who had spoken and had been active in raising awareness on the issues – it was “inspiring to hear” from them.

He said support for Assange had crossed political boundaries in Australia, with both the independent MHR Andrew Wilkie and the LNP’s George Christensen visiting him at Belmarsh prison in the UK.

If Australia sits on its hands on this issue, it will set a “dangerous precedent” for all journalists and truth-tellers, he argued. Supporting the motion, on the other hand, would send a message to all whistle-blowers “to stand up and tell the truth”.

Americans would stand up if Assange were their citizen, Cr Cocking suggested.

Cr Jacinta Price, attending the meeting by phone,  spoke against the motion, saying she was “fed up with things being brought to the chamber” that were not going to benefit the community. She spoke of a cousin presently in a coma because of domestic and family violence; there are “issues under their noses people are prepared to ignore”, she said.

There were heckles from the gallery to which Mayor Ryan responded with a stern warning: they would be asked to leave.

Cr Marli Banks seconded the motion. Her concern is with Assange’s rights to natural justice and unbiased processes.

Cr Auricht said he respected the petitioners. He also acknowledged that Assange is “suffering” and that he is a a whistle-blower. That was “all well and good for what he did expose” but he got his information by illegal means, which is why he is being prosecuted.

(Chelsea Manning was prosecuted for leaking the information, jailed and later pardoned by President Barack Obama; Assange as publisher did no more than many a reputable news organisation has done – putting information in the public interest, including from Wikileaks, into the public domain. It is arguable whether that is anything other than a political offence, which is why the extradition proceedings might founder, as the extradition treaty between the US and UK excludes political offences.)

It was also Cr Auricht’s opinion that in publishing the information, Assange had put lives at risk.

More heckles and Mayor Ryan told the heckler to leave the gallery. She did not.

Cr Cocking said he understood the concerns of Crs Price and Auricht that council has more immediate issues to deal with, but urged their support for writing a letter as a form of advocacy, as council has done on many issues.

The motion was put to the vote. Only Crs Cocking and Banks raised their hands in support.