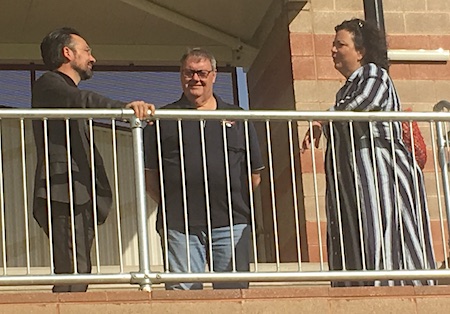 The opening of the Albrecht Oval grandstand this morning was an unlikely occasion to gain some clarity of the process – or lack of it – to find a place for the national Aboriginal art gallery.

The two antagonists were chatting amicably and shaking hands after jointly unveiling the inevitable plaque: Dale Wakefield, government front bencher, Labor, and incumbent in Braitling, the seat the son-in-law of the other VIP present wants to take off her. That is current Mayor and contender for the neighbouring seat, Araluen, a member of the Country Liberals.

Mayor Ryan wasn’t giving anything away, to the point of talking over Ms Wakefield.

She in turn was upbeat about the prospects for the gallery, welcoming the discussions with the council, asserting that the council “agree that it is a good site” – namely the Anzac Hill precinct, so far rejected by the traditional owners.

Council CEO Robert Jennings, who was also there, when asked by the Alice Springs News, said the council does not have talks with the TOs, but this is left to the officers from the government.

It does not instruct the CEO to negotiate with the TOs which is odd, because they are obviously citizens of this town, most likely ratepayers, and constituents of the nine elected members of the town’s local government.

The News asked Ms Wakefield to comment about Chief Minister Michael Gunner’s claim this week that there are fresh talks with the Town Council about the gallery.

What is fresh about it, we asked.

M Wakefield went to answer: “Before Christmas the council announced some plans …”

Mr Ryan cut in: “Yes, unanimously supported it and that work is being handed over to officers, [both from the] Chief Minister’s Department and the Town Council are working towards that question you are asking.”

NEWS (to Ms Wakefield): You said before, the sticking point is the traditional owners’ consent of the Anzac Hill precinct as the site. Do you have evidence of that consent?

RYAN: This is a job that is being done by officers.

NEWS: You are the Mayor.

RYAN: I am not operational. The direction of the council is the CEO to work with the Department of Chief Minister. They will come back to us when they have the next steps.

NEWS (to Ms Wakefield): It appears there is no consent. Where are the negotiations at?

WAKEFIELD: There are two separate processes going, one with traditional owners and there is a process with council. You’ve asked about the process with council [she had some harsh words to say in September last year]. That’s happening at officer level, and once we’ve got some more clarity around the possibilities of the Anzac precinct … it’s great that now council agree that it is a good site, and they are willing to negotiate around it. We see this as a step forward, and we’ll continue to do that. We will also continue to have conversations with a range of people.

NEWS: Including traditional owners? What are they saying to you at the moment?

WAKEFIELD: I haven’t had a meeting around this while we are negotiating with council. We want to make sure we are really clear what we are going back to traditional owners with, so we’ll go through this process at officer level and continue the conversation. We’ll have more to say when we’ve got those next steps clear.

NEWS: Where are the officers at? Obviously you would both know that, wouldn’t you?

WAKEFIELD: No, they are … (keeps speaking)

RYAN: They will report back to council when as soon as they have got anything to report.

NEWS: They haven’t got anything to report yet? [The gallery project dates back at least to the Giles Government.]

RYAN: We sent a letter to the Government saying this is what we would like to do, and that was unanimously supported. Rome wasn’t built in a day. This took eight months. The gallery might take a bit longer.

Meanwhile Mr Jennings says: “We’ve been meeting roughly every fortnight with the NT Government, between us and the other officers, we feel we’re making progress.”

He says the council is coming from the “clear council resolution” which is requiring evidence of consent for the Anzac Hill site by the traditional owners.

NEWS: Who are the traditional owners you are talking with on the Aboriginal side?

JENNINGS: That’s for the Chief Minister’s office to work out. They are taking that on.

NEWS: You are not talking with the Aboriginal people?

JENNINGS: No. We’ve identified a process and how exactly this process falls out will now be taken back to council and probably from the Chief Minister’s office to their Ministers to see what happens next.