'I saw the bombers'

World War two had come to Australia’s front door with the fall of Singapore to the Japanese on February 15, 1942.

The Japanese shocked the Allies with the ease in which they subdued the famous British fortress.  More than 15,000 Australian troops were taken prisoner.

The United Australia Party government led by Robert Menzies was ill prepared for the crisis and Menzies was forced out of office being replaced by Arthur Fadden (Country Party).

Two independents, Coles and Wilson, crossed the floor on a budget motion voting with Labor.  The Fadden government was forced out of office with the Curtin Labor government gaining power.

On February 16, 1942 35 Japanese bombers attacked a convoy from Darwin that was on its way to reinforce Allied defences at Kupang on Timor.

The badly damaged convoy limped back to Darwin on February 17. It seemed inevitable that an attack on Darwin was imminent.

Even though the defences at Darwin had been reinforced their capability would be hopeless against any substantial enemy attack.

Four Japanese aircraft carriers, Soryu, Hiryu, Akagi and Kaga with destroyer and cruiser escorts were lurking in the Timor Sea.

Soryu and Hiryu were two of Japan’s latest additions to its imperial fleet.  They carried 71 and 73 planes respectively.  Akagi carried 60 planes.

The fleet was under the command of Admiral Nagumo.  The fleet was positioned in the Timor Sea 220 miles north-west of Darwin.

Early in the morning of Thursday 19 February, 1942 188 aircraft took off from the four carriers flying in formation in a direct line for Darwin.

This formidable assembly of aircraft consisted of 36 Mitsubishi A6M Zero-Sen fighters, 81 Nakajima B5N “Kate” light bombers and 71 Aichi “Val” dive bombers. They were joined later by 54 land-based bombers form the Celebes and Ambon.  The terrific drone of 188 engines shook the stillness of the morning sky. 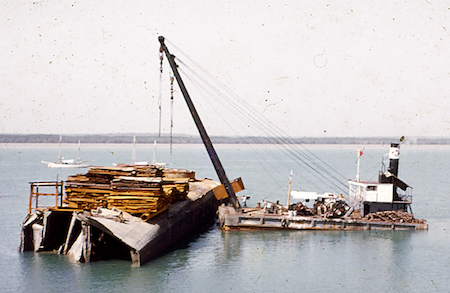 Bathurst Island lies 50 miles north of Darwin and on that fateful morning Father John McGrath, the priest in charge of the Catholic mission on the island was going about his daily duties.

Children were on their way to school. Mothers were cleaning their small houses and fathers were beginning work for the day.

Father McGrath’s attention was drawn to a loud moaning noise in the sky.  He looked up to see a great number of aircraft in the north west.

Father McGrath became alarmed given the excessive number of aircraft. Being a coast-watcher he thought it prudent to radio Darwin so he went to the small radio shed and began transmitting at 9:35 am.

His communication said: “I have an urgent message. An unusually large air formation bearing down on us from the northwest. Identity suspect. Visibility not clear.”

The Japanese aircraft picked-up his message and suspected it was a warning to Darwin. Three aircraft peeled away from the formation, flew low over the island and opened fire with their machine guns.

Bullets struck all around the shed where Father McGrath was transmitting and tore holes in the adjacent wall; but the priest, at risk to his own life kept sending his message.

McGrath’s message was received at the Amalgamated Wireless Station in Darwin where the message was further transmitted to the RAAF operations room.

It was thought that the aircraft were probably American P-40s so no immediate action was taken. It was not until 9:58 am that the general alarm was sounded almost as the first bombs began to fall.

All havoc broke loose. There were 55 ships in Darwin harbour and at least 70 waterside workers on the wharf.

Bombs exploded. Men were screaming and dying everywhere. The Neptuna was hit while tied at the wharf. In moments it blew apart with a mighty force, for it contained hundreds of tons of depth charges. Forty-five crew members died.

The American destroyer Peary fired on the Japanese planes but 80 of her crew were killed after heavy bombardment. USS Peary blew up and disintegrated. The RAAF base was severely damaged.

Government buildings were destroyed including the post office with every employee being killed.

A bomb fell near Christ Church, Anglican Church damaging part of the roof thus making it the only church in Australia ever to be subjected to enemy action in wartime. It was actually a garrison church for the armed services during WW2.

The immediate result of the bombing was mass evacuations.<   Aboriginal children were evacuated from Bagot Aboriginal Reserve, Bathurst Island, Croker Island, Roper River River Mission, Onepelli Mission and other scattered settlements.   White families and Chinese families were evacuated from Darwin.   Missionary Margaret Somerville led the now famous evacuation of 95 Aboriginal children from Croker Island.   Army trucks were used to take Aboriginal children south with many stopping over at The Bungalow, Alice Springs. Two such children were Dr John Moriarty and noted athlete Wally Macarthur.  Both were taken without parental consent or knowledge.

As part of the evacuation, in May, 1942, the Anglican priest in Alice Springs, Father Percy Smith, who was a part-time Army chaplain escorted 68 Aboriginal women and children of mixed descent from The Bungalow on an empty troop train that was returning to Adelaide.

The cost to the Commonwealth was 247 pounds. The group stayed at St Luke’s mission, Whitmore Square until arrangements were made for many of them to go to the Mulgoa mission at the foot of the Blue Mountains in NSW.

The great irony of this saga is that in 1959-60 a Japanese company, Fujita Salvage Company was awarded the contract to raise and remove wrecks of ships in Darwin Harbour that were sunk during the bombing on 19 February, 1942.

If Father McGrath’s warning had been properly heeded then the authorities would have had 20 precious minutes to prepare and perhaps fewer people would have died.

That might have been enough time to get most of the RAAF aircraft into the air. Sending a message in a designated war zone while under enemy fire was an incredibly brave act for which Father McGrath has never received any formal recognition or honour.

John is the son of Father Percy Smith (1903-82), first resident Anglican priest in Alice Springs in 1933. John has written his father’s biography, “The Flower in the Desert.”