Sir – NT Labor now has no support from any party in the Johnston by-election.

Under the full preferential system, we are forced to rank all candidates and parties from 1 to 7. Both the Major Parties are last on our card, which is indicative of what Territorians really think of them. The fact NT Labor is last is not an endorsement of the CLP. 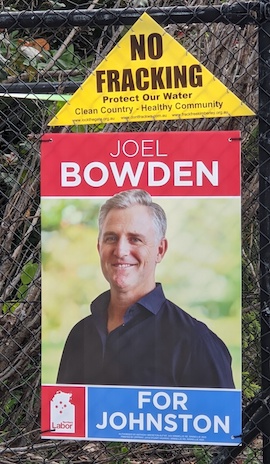 NT Labor has infuriated locals by deceptive advertising  through the deliberate placing of the familiar yellow triangles against fracking next to corflutes of the Labor candidate.

This suggests NT Labor is against fracking when everyone knows the Gunner Labor Government has been using our taxpayers funds to subsidise, encourage and give approvals to companies to frack the NT.

They have the largest amount of donations and have accepted funding for their Johnston campaign from fracking companies (Santos), at least three betting companies and the Australian Hotels Association (Vic).”

We are very concerned about these donations and the community should be concerned too.

If it was not for the submission made to the Mansfield Inquiry by the then president and candidate for Johnston, Braedon Earley (at left), Territorians would have no idea who funds the campaigns and by implication, controls the policies of political parties in the NT.

We do not take donations from oil and gas companies associated with fracking, betting companies, the alcohol industry, lobbyists or unions.