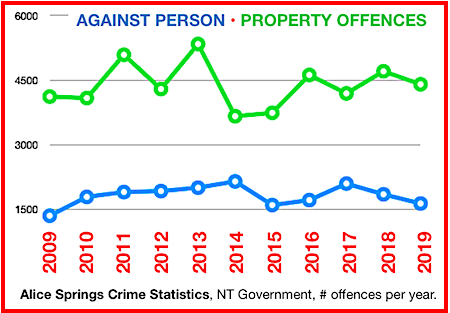 Contrary to current popular opinion, crime against the person in Alice Springs is not worse than ever before, if you take the NT crime statistics as your guide: The graph is pretty flat since 2009 and in fact is going south a little, after an all time high in 2014 and another peak in 2017.

Annual numbers of offences against the person and property offences.

However, just in case you’re getting ready for a round of back-slapping when  the latest stats come out on Friday, the number of offenders per 1000 people in 2018/19, according to the Australian Bureau of Statistics (ABS) were 12 for Victoria, 15 for WA, 16 for the nation and NSW, 19 for Tasmania, 27 for SA and 51 for the Territory.

The NT’s is  more than three times the national number.

This horrendous base figure is conveniently ignored when the NT Government releases its monthly details, failing to reflect the prevailing public mood, let alone that on social media.

Tell the news of an improvement in one or another category of offences to a person whose home has been invaded, whose car has been stolen and trashed, who doesn’t get much sleep because of the two Dobermans next door reacting to intruders in the neighbourhood, or whose mate was bashed by a gang and robbed of his smokes, mobile phone and a few dollars on his way home from a meal in town.

The December crime stats on Friday will no doubt again be cherry picked to make one political point or another.

Sample: “Alice Springs has experienced a remarkable 40% reduction in alcohol related assaults and a 33% reduction in domestic violence assaults,” claims Central Australian Aboriginal Congress (budget of $43m in 2019 in grants and contributions, mostly from governments).

Congress’ top echelon takes leading roles in the People’s Alcohol Action Coalition which successfully pushed for an alcohol floor price that is making grog purchases here more expensive than in most of Australia.

Bur our 10 year graph shows that reductions are not necessarily sustained. It also shows that when you don’t cherry pick, but put all categories of “offences against the person” together –  assault, negligent acts endangering persons, abduction, robbery, sexual assault and others – the fluctuations flatten out.

No doubt all “offences against the person” are what count in the public mind.

Looking at them as a whole renders the statistical picture less liable to polarised interpretations – whether by a government seeking to say there is less crime or by angry locals saying that there is more.

The “NT Crime Statistics” are based entirely on reports made to the police, not on what they have investigated, with charges laid or convictions achieved.

There are no peer reviews.

There is a clear separation in the process: First police provide the data, not supervised by anyone including the Criminal Research and Statistics team in the Department of the Attorney-General and Justice.

That team takes these unchallenged base data and turns them into statistics.

In the case of domestic violence, the officer filling out the form for the crime statistics needs to decide whether there was alcohol involved, not involved or not known. Last November, for example, the count in Alice Springs was 59, 11 and 15, respectively.

How many did he or she get wrong?

No-one knows – and this is the crucial problem with the crime statistics, the Holy Bible when it comes to calling for more cops (we already have three times the nation’s average in the NT’s southern police command and we’re about to get more) right through to building a platform for political candidates.

Can police crime statistics be trusted when they are not independently tested?

Researching this report we spoke to the Senior Communications Officer of the department.

She said: “NT Police categorise offences for statistical reporting according to Australian Bureau of Statistics standards.

”The Criminal Research and Statistics team [in the department] participates in a national forum to ensure the consistency and comparability of crime recording and reporting on a national basis.”

Nothing of the sort.

We asked the ABS for the national figures corresponding with the graph shown here.

This was their reply: “Unfortunately the data you have received from the NT stats team cannot be directly compared with this ABS dataset, as there’s a subtle but important difference in terms of what the two things are counting.

“The data being used for Alice Springs appears to be based on number of offences, whereas ABS data is the number of offenders for a particular crime.

“The issue here is, one offender can have multiple offences so they are not comparable in absolute numbers (i.e. counts) and changes over time will also be problematic.

“It might be worth finding out whether the NT stats team also has data on offenders for Alice Springs, because you’ll be able to do an ‘apples with apples’ comparison if so.”

Does the NT statistics team apply their methodology to the national figures? Obviously not.

And so, conveniently for NT governments (note the plural) and their police, the public has no way of comparing the clearly horrendous crime rate in the Territory with the rest of the nation, apples for apples.

We put to the Communications Officer that the government’s statistics officials are doing little more than the paper work for the celebrated crime stats: “In fact the department does not check the police process of reporting and recording of the alleged crimes included in the statistics, nor whether all reports from the public are recorded nor whether they are attributed to the relevant category of offence,” we summarised.

“The department’s functions are merely to collate the information provided by the police and turn it into a statistical format.”

“The work requires detailed knowledge of national crime reporting standards and involves more than preparing tables. It is wrong to say it is only a clerical task,” she replied.

“What role precisely does the department have in the receiving, recording, interpreting and categorising of crime referred to in the stats,” we asked. “Does the department examine and oversee any part of that police process, and if so, how?”

“Criminal investigations, recording of crimes, and managing the quality of police data are the responsibility of NT Police,” she replied.

That of course is the very same police that will not permit the examination of their processes.

Under-reporting of crime also affects the relevance of crime statistics.

Even police are apparently under-reporting. The NT Police Association, calling for tougher sentencing options to deter attacks on its members, says in 2019 there were 175 assaults on NT police but “25% of attacks are going unreported”.

Peter Grimbeek, from Mindhive, an online think tank of about 8500 experts in a variety of fields, when asked to comment on 2018-19 figures in the NT, said: “The incidence rate of sexual assault events is rather low and the incidence rate for assault and property is rather high compared to those in other categories.

“Why is the incidence rate for sexual assault and also the change in that rate so low?

“Also, why is the incidence rate for property damage high, yet the rate of change in the statistics does not reflect that incidence rate?

“Assault and property damage together make up about 50% of the events. Alcohol and domestic violence related assault make up another 28%. House break-ins, commercial break-ins and motor vehicle thefts make up another 23%,” says Mr Grimbeek (pictured).

“Finally, sexual assaults make up 1% of the total number of events.

“This extremely low percentage is somewhat surprising, given that it is a really big deal.”