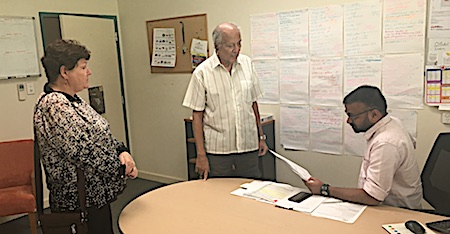 Two readers of the Alice Springs News, including Peter Hoey and “Jodi”, picked up an inconsistency in the events surrounding the treatment of Alan Viegas by his daughter, Lisa Wilson, the organisation running Old Timers and Flynn Lodge in Alice Springs, and the police, including restricting his liberty and taking control of his property.

Mr Viegas is an involuntary resident of the Flynn Lodge which is run by the  Australian Regional and Remote Community Services (ARRCS) of the Uniting Church – see our earlier coverage.

As we reported previously, Ms Wilson (we are now naming her) last Friday was on a speaker phone to the manager of Flynn Lodge, Anoop Thomas, in his office where she could be clearly heard by the people present: Mr Viegas, one of his former carers and campaigner for his rights, Mr Thomas and me, Erwin Chlanda, present as the editor of the News to cover the story and taking the photo above.

Ms Wilson said she is holding is an Enduring Power of Attorney over her father, obtained in September last year: This is the “gold standard” she said, and this could not be trumped by the document served on Mr Thomas by her father, the revocation of a Power of Attorney.

However, NT legislation for Enduring Power of Attorney ceased to exist in 2014, as Mr Hoey and “Jodi” have pointed out.

Ms Wilson’s actions with respect to property of Mr Viegas and limitations of his movements – possibly under a non-existing power – are supported by the aged care facility ARRCS and the police.

The police gave a trespass warning to a past carer of Mr Viegas who has been campaigning for his rights.

We invited comment from Ms Wilson, ARRCS and the police at 7.42am but have not received any responses at the time of publication. We will report them if and when they come to hand.

At 9.27am another former carer and campaigner for Mr Viegas texted, in part: “It has all been revoked. So what is holding Alan there?”

By this, the News understands that the “gold standard” power Ms Wilson believed she held has been revoked.

At 9.50am, the carer added: “Alan is now the ONLY person to access his funds at the [withheld] bank.”

The News will continue to cover this story.