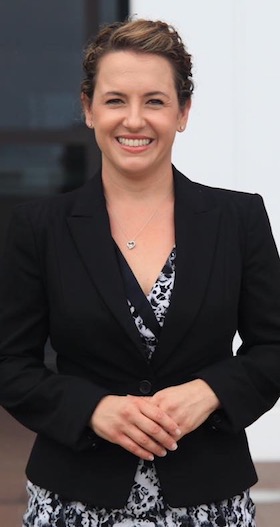 In a lightning visit to Alice Springs, two weeks and three days into her new job as Leader of the Opposition, Lia Finocchiaro met mostly with business people and talked almost exclusively about crime.

NEWS: Do we need more police?

FINOCCHIARO: We need to give police whatever resources they need. They have a very difficult job.

NEWS: Candidate for Braitling Josh Burgoyne has said the CLP would be guided on law and order issues by the police. Is that so?

FINOCCHIARO: Absolutely. We obviously have some very strong views, but we need to support our police. If we get into government we wold be working very closely with police.

NEWS: The Southern Command, that’s roughly from Tennant Creek south, per capita has more than three times as many police officers when compared to the national average. Yet year after year, Territory crime is twice as bad or worse compared to the Australian average. Do you think our police are performing well?

FINOCCHIARO: Absolutely. I think our police are doing an excellent job with the resources they have. Crime is not just a policing issue. It is a societal issue. That’s part of the reason why we think that youth justice should be taken out of Territory Families and moved into Corrections. Those people who have that expertise  can provide that custodial support, that monitoring support that offenders need.

NEWS: Talking about societal issues, Warwick Sarre, the Dean of Law at the University of South Australia, seems to agree with you. He says police cannot prevent the vast majority of crime; they simply respond to it. It is society that stops crime. Are we spending too much money on police, and not enough on social problems?

FINOCCHIARO: Police is a demand driven agency. Police don’t get to choose how much crime they respond to. It’s important that government are supporting police with whatever resources they need. But there are other ways to provide support into the community and part of that is better utilisation of youth engagement officers, a change in the way in which we approach youth justice, [in which] the NGOs, the community and the police are all working together.

NEWS: But isn’t it amazing that this vast number of police cannot deal with maybe 120 kids running riot?

FINOCCHIARO: I think our police are doing an excellent job. They are under significant pressure in a very difficult and dynamic work environment. We need to have other solutions that take pressure off police so they can focus on really awful things. There are other mechanisms to deal with youth justice and youth crime or anti social behaviour.

NEWS: These are the mechanisms to reduce crime which means less money would be needed for police. It’s a chicken and egg situation. Money now spent on police could be spent on social initiatives. Professor Sarre says if you halve expenditure on police, crime would go up only minimally.

FINOCCHIARO: I don’t know where he got those statistics from. It is certainly not supported by anything I have heard.

NEWS: The police are against youth curfew. If the people of Alice Springs want a curfew, and that is likely, which side will you support?

FINOCCHIARO: We have said all along that we believe in community driven solutions. In Alice Springs there is a lot of talk about youth curfew. There is a large group who support it and there are others who don’t know if it will be effective.

NEWS: Would it be true to say if the people want a curfew and the police don’t, under a CLP Government the people will get their way.

FINOCCHIARO: Everyone needs to come to the table. It’s not about taking sides, it’s about achieving a workable solution. Curfew means a lot of things to a lot of people.

NEWS: If a curfew is brought in, this would require that children from dysfunctional homes are detained in some place yet to be created. They would not be allowed to leave until the morning. Would a CLP Government support such a measure?

FINOCCHIARO: That’s not true. Curfew is one of the words that can bring about a lot of different scenarios [around the world]. Some people feel a curfew would need to be the creation of a safe place. Others believe it’s not something police would be involved in and youth workers would work with young people. I come to this with no preconceived idea of what a curfew is.

NEWS: What seems to be inevitable is that children would be detained at a safe place, not able to leave until the morning, or a curfew is meaningless.

FINOCCHIARO: It may or may not be. There are a lot of different ways to do a curfew. It boils down to people wanting something to happen. What the Labor Government is doing is not working. People feel things are worse than ever before.

NEWS: If a curfew includes provisions for children to be confined to a place for the duration of the curfew, is that something a CLP Government could live with?

FINOCCHIARO: If there is legislative reform required, if there is infrastructure that’s required, then that’s a conversation we have to have at the time.

NEWS: You are three and a half years into the Parliamentary term and half a year from the election. Why has the CLP not earlier formed a clear policy with strategic actions?

FINOCCHIARO: Gary Higgins and I over the last three and a half years have been very clear what we would do differently to this Labor government, and we will be releasing future policies over the coming months as we listen and engage more with Territorians.

NEWS: You were in the CBD today. Lots of shops are closed and in the evening that area is considered to be dangerous. What will you be doing to turn this around?

FINOCCHIARO: We have an economic situation in the Territory like we’ve never faced before. We are the worst performing economy in the nation.

NEWS: Give me the five most important specific initiatives you would introduce to bring businesses back and make the town safe.

FINOCCHIARO: Our policies will be released in the coming months.