War on Iran must be prevented 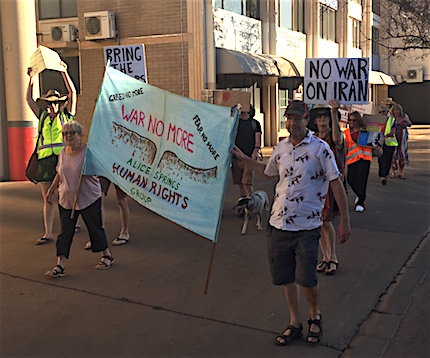 On Saturday Mr Pilbrow was among a small group of passionate locals who held a peace march and gathering in Alice Springs with messages calling for “No war on Iran” and to “Bring the troops home from Iraq”. The event was part of a Global Day of Protest on the heightened risk of a US war with Iran, following the arguably illegal assassination of Iranian General Qassem Soleimani in Baghdad in early January. The killing was ordered by US President Donald Trump and carried out by a US drone. Several other protest events were held across the country, in Perth, Adelaide, Melbourne, Sydney, Newcastle and Brisbane, coordinated by the Independent and Peaceful Australia Network (IPAN). Mr Pilbrow is a representative of IPAN, as well as of the local peace group – the Alice Springs Peace Action Think Tank (ASPATT).

IPAN was dismayed by President Trump’s decision to assassinate General Qassem Soleimani. According to media reports at the time, General Soleimani was due to meet the Iraqi Prime Minister Abdul-Mahdi on the morning the general was killed, in order to discuss a diplomatic rapprochement that Iraq was brokering between Iran and Saudi Arabia. Soleimani had arrived in Baghdad not to plan attacks on American targets, but to coordinate de-escalation with Saudi Arabia.

IPAN’s condemnation of the assassination of General Soleimani is not to be seen as giving blanket approval to all of the policies or actions of the Iranian government or its military forces. However, it is a call for all countries to abide by the rules of international law.

After the death of General Soleimani, President Trump was reported as saying that he served up “American justice” by ordering the drone strike that took him out.

It is critical to ask if Australia was implicated in this drone strike.

Leaked documents from the US National Security Agency several years ago revealed that intelligence from Pine Gap is being used on US battlefields – locating of the source of signals is crucial for targeting military action, including by unmanned drone.

The Australian public have a right to be informed if our country is involved in such attacks as these.

We must resist a form of  ‘justice’ that strikes without charge, without trial or any legal process. This should not be justice by an Australian standard.

Let us also not forget that a version of so called “American Justice” started this whole thing 66 years ago when a democratically elected Iranian Government was ousted by a US and UK coup at end of 1953. These countries were our allies – and this occurred during peace time.

The 1979 Iranian revolution can be seen as response to the coup 26 years earlier. But the events of 1979 now seem to be used as an excuse for anti-Iran sentiment in the US. What a different Middle East we might have today if this coup had never occurred.

In the US the United National Anti-War Coalition (UNAC) have highlighted that “US aggression against Iran threatens to begin yet another disastrous, bloody war.” Such concerns led to the weekend’s global action to demonstrate clear opposition to any US-led war on Iran.

A war with Iran would have devastating impacts on the lives of people in the region and, should Australia be drawn yet again into another illegal US-led war, on the lives of Australian soldiers.

Australia should have learned lessons from the Iraq invasion. That futile action led to loss of hundreds of thousands of lives and ongoing human misery, an escalation of terrorism across the world, destruction of the environment in Iraq and huge wastage of money – and for what benefit? Given the capacity of the Iranian military, war with Iran has the potential to be far worse than the war in Iraq.

While it has been encouraging that the Prime Minister Scott Morrison has said he will pursue “restraint” and a “de-escalation” of tensions in the Middle East, there is more that he could do. IPAN believes the Prime Minister should have put a stop to its plans to send the HMAS Toowoomba to the Straits of Hormuz, as sending it could be seen as a provocative move, effectively providing a message of support for the USA’s action – where there should have been condemnation.

The Prime Minister justified sending the warship to Iran as guarding oil supplies but in fact, the greatest threat to trade in the region is the very real threat of war. Australia should be a good friend and ally by speaking truth to the US and dissuading it from another war that could draw Australia in.

The Australian Government should help diffuse the situation in the Middle East, starting with reversing its decision to send HMAS Toowoomba.

It should also respond to the Iraqi Parliament’s demand and bring our troops home. Currently around 2000 Australian personnel are still on the ground.

IPAN is also calling for no sanctions on Iran, as these are a weapon of war, contributing to devastation and lives lost.

Australia has a very large defence budget – but we do not have enough money allocated to fund fire-fighting efforts and to respond to and reduce the impacts of climate change. We should be funding firefighting – not war.

All of us opposed to war can do something by speaking up at this time – and urge our Government to reduce not inflame tensions in the Middle East.

We must send the message: No war on Iran.