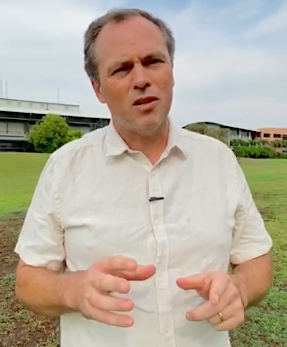 Can an additional 6700 new international students be attracted to the Northern Territory by 2025?

Education is Australia’s most lucrative export industry after iron ore and coal.

Last week the Gunner Labor Government was spruiking a 62% increase of international students in the Northern Territory in the three years since 2016.

Percentages can be misleading, so what are the raw numbers?

Last week CM Michael Gunner said: “It is important we support those sectors that drive ongoing permanent jobs in the Northern Territory. One of those priority sectors is international education.

“Since 2016 we have seen a 62% growth in student numbers in the Northern Territory and 25% in the last year, so this is an important area for us.

“Every [foreign] student is worth about $40,000 a year to the Territory economy, but they also bring something that’s priceless – they bring energy, they bring spirit, they work around our local community.”

Mr Gunner says the education sector is worth about $113m to the economy.

2025 stretches beyond the 2024 election and into the next term for whomever is in government then.

If they come, most of these students will be headed for Charles Darwin University, but is CDU up to the challenge?

As has been widely reported CDU is struggling financially, posting a $21m deficit last year and cutting about 100 jobs.

Dr Kelly doubts whether the 10,000 target is achievable.

“Territory Alliance is anti-spin so we can’t agree with the numbers being put forward by Mr Gunner,” he says.

“Also, CDU’s international student numbers actually dropped significantly in 2017/2018 and there is nothing persuasive coming from CDU or the Labor government to suggest that the downturn will soon be followed by a massive increase.”

Dr Kelly is standing for the Darwin based seat of Casuarina at the August election.

“It is misleading to say every international student is worth about $40,000 a year to the Territory economy because that sounds like $40,000 per student being added to the NT economy from outside, that is, export revenue.

“The fact is that most international students pay for most of their tuition fees by working in the NT when they are not studying.”

“The StudyNT office do a great job in representing NT education to the world but our political and education leaders need to better engage with viable markets and design more intelligent policies to attract international students to the NT.”

“This year, we will keep selling the Northern Territory overseas in target markets like India, Nepal and China,” said Mr Gunner.

“I am very pleased to say that both Bangladesh and Brazil are [also] in our Top 10 category for [international students coming] into the Northern Territory.”

[Mark J Smith was formerly a political and policy adviser to the Government of South Australia.]