Home Issue 19 NT politics: Seen it all before?
Issue 19Volume 25

NT politics: Seen it all before? 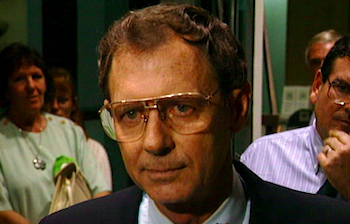 The year 2019 has strangely echoed several themes from 1989, with some uncannily similar events occurring.

For example, Chief Minister (and Member for Fannie Bay) Michael Gunner – assisted by Minister Paul Kirby – led a 100-strong trade delegation to Shenzhen, China, a couple of months ago.

This is almost identical to the trade mission led by CM (and Member for Fannie Bay) Marshall Perron (pictured) – assisted by Minister Barry Coulter – to Hong Kong and the Shenzhen Free Trade Zone three decades earlier.

There was one significant difference: The Perron Government sponsored the campaign in the Northern Territory, as in the late 1980s the CLP was an early leader in climate change awareness.

With this theme in mind, my attention is drawn to the imminent by-election for Johnston triggered by the resignation of popular member Ken Vowles.

While it’s a little out of sync, I’m reminded of the by-election for the Darwin seat of Wanguri in August 1989, prompted by the resignation due to ill health of member Don Dale.

Labor has pinned its hopes on high profile former AFL footballer Joel Bowden; likewise in 1989 the CLP chose John Taylor, the coach of the unconquerable St Mary’s AFL team in Darwin during the 1980s.

Like Labor now, the CLP government was unpopular 30 years ago during increasingly tough economic times.

Four candidates stood for Wanguri in August 1989, representing the CLP, Labor, NT Nationals and, for the first time, a Green independent.

The Green candidate won 16% of the primary vote, which was also the percentage of the swing against the CLP, and Labor candidate John Bailey won the seat after distribution of preferences.

The major reason for the disastrous showing of the CLP was simply that voters wanted to register a strong protest vote against the performance of the Territory Government.

The upcoming Johnston by-election provides a similar opportunity for voters to do likewise for the Gunner Government in February.

I anticipate the size of the swing will be of great interest and consequence.