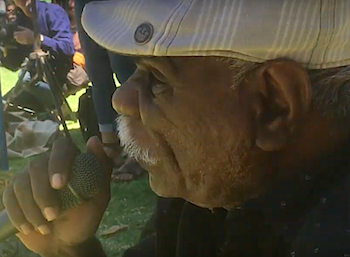 Sir – Tomorrow the Alice Springs Magistrates Court will consider an application by Zachary Rolfe’s defence counsel to shift the court proceedings to Darwin.

Rolfe, a Northern Territory police officer, was charged with murder after he allegedly shot and killed Kumanjayi Walker in a house at the Yuendumu Community on November 9.

Rolfe’s defence counsel may argue that the court proceedings should be held in Darwin on December 19 due to expected protests, largely driven by the Yuendumu community attending the directions hearing.

Warlpiri Parumpurru (Justice), a Yuendumu Select Committee, which has been formed to represent the Yuendumu community on matters relating to the shooting of Kumanjayi Walker, met on Monday.

The committee stated: “Warlpiri are only planning a peaceful sit down on Alice Springs court lawns, not big protests as speculated.

“Since this tragic event happened, the Yuendumu community have respected the police officer’s right to a fair trial and the leaders and elders strongly encouraged their community and the wider community to do so as well. No-one has speculated about any evidence.

“No matter where the court is held, there will be protests across the country.”


Warlpiri elders and leaders should be commended for their formidable leadership as they have ensured that the community responds peacefully through non-violent protests.

In the Northern Territory alone a total of 24 protests have occurred [and] within two weeks of the incident, 43 national protests were held across all Australian states and territories, including international protests in Vanuatu and Aoteora, New Zealand.

Any consideration should ensure that hearings are accessible and open to the Yuendumu community.

Ned Hargraves (pictured at the rally on November 14), chairperson for Warlpiri Parumpurru (Justice) is greatly concerned if the Alice Springs Magistrates Court reaches a decision to hold the court proceedings in Darwin.

He stated: “We already feel left out. As it is, moving the trial to Alice Springs, when it happened in Yuendumu, already places a heavy burden on community members. We are always left out of things.

“Kardiya are always making decisions for us. Darwin is too far away from country for people to travel to and does not respect Warlpiri’s wishes. We are not the ones who did it and if it moves to Darwin, we will be disrespected.”