The Outback Way traversing the continent east-west will be a boon for Alice Springs.

The MinMin mural at Boulia.

But for tiny Boulia – population about 250, in the district 496, total council rate revenue a bit over $1m – that road is vital.

“It is holding this community together,” says Shire Council CEO Lynn Moore.

The shire has resolutely ventured beyond Rates, Roads and Rubbish by giving the second R a whole new meaning for a local government: The council is not just maintaining roads, but building them.

That makes it the biggest employer there, and the only hope for a job for many of the locals.

The 100 kilometres of the Outback Way between the Georgina River and Boulia is being built and sealed by the council. It is an excellent road. I drove on it last week.

That has the politicians and bureaucrats across the border, in the Northern Territory, scratching their heads about how to explain to their taxpayers why they are being fleeced, with a cost of $1m per kilometre, nearly three times as much.

Ms Moore is adding an explanation to the unconvincing ones usually offered by NT officials (and covered in this newspaper – google them, and note update at the bottom of this report).

The skills of the Boulia shire road builders isn’t in doubt, given the quality of their product. The requirements of the Queensland standards are fully met.

So why does the council not tender for the sections of the Plenty River highway east of Harts Range, saving the taxpayer a motza?

One reason, apart from being flat out building and improving roads in their patch: In the NT road workers need national accreditation that is far more stringent.

In fact, says Ms Moore, to put their road crew through the necessary courses and training would be a significant cost for council, making tendering for work in the NT a burden on both staff and ratepayers.

“However, this may change in the future,” says Ms Moore.

It is clear that accreditation doesn’t make them better road builders, but it ticks a whole of boxes for the bureaucracy.

There is another looming problem: The Feds pay 80% of the Outback Way costs, 20% needs to come from the states – Queensland, WA and the Northern Territory.

The trouble is, the Donohue Highway to the NT border, while being part of the Outback Way, is a council road, not a state road, which puts the 20% Queensland government contribution in doubt.

This would put a shadow over the council’s splendid service to the town: The council chambers are a very simple weatherboard house. The public library next-door is solid brick and quite recent.

Near that is a well-kept pool, two shaded tennis courts and big hall for sporting use.

And its facade facing the road features Western Queensland’s biggest mural, showing what’s making Boulia famous: The Min Min Lights which “have been described by witnesses as floating, fast-moving balls of colour that glow in the night sky and stalk people, leaving some feeling confused and frightened,” as the ABC puts it.

The eastern part of the Outback Way (Alice to Winton) in klicks. Road conditions at the time of publication:- 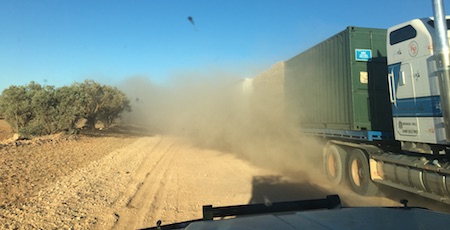 Fingers crossed no-one is trying to overtake the road train.

Ranges to the south of the Plenty River Highway near Mt Riddock. 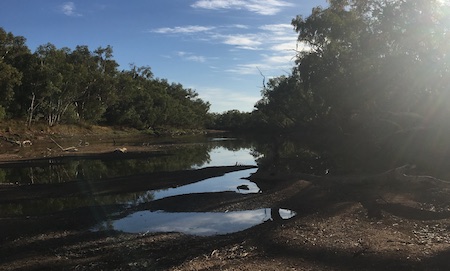 The Burke River at Boulia – the long drought is leaving its mark. 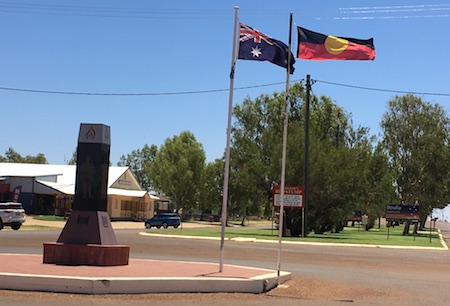 Rowland Richardson, Media Manager of the NT Department of Infrastructure, Planning and Logistics, provided the following explanation on October 15, 2019:

“The Plenty Highway followed an open tender process and was awarded in line with our buy local policy. The government remains committed to investing in the Territory and supporting local jobs.

“This has been conveyed to these entities on several occasions but they are yet to tender for any works.”