A living connection with the past 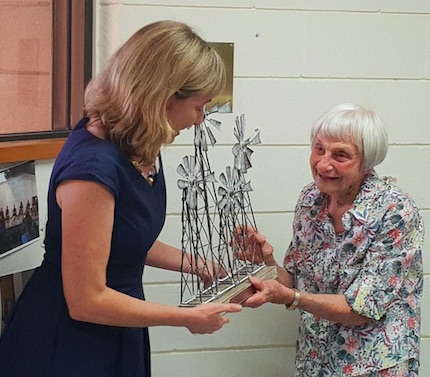 There is now a Jose Petrick Room at the School of the Air. Mrs Petrick joined the school community as a governess for some of its students in 1951, the very first year of the school. At the naming ceremony on 2 December she regaled those present with her memories of the era, which the Alice Springs News is pleased to publish below.

I first heard of the School of the Air when I flew up to Alice Springs to be the Chalmers family governess in 1951. The family, Mac and Rose with their three children, Heather, seven years, Cameron, six, and Jock, three, lived on MacDonald Downs Station.

Mac had built the children a classroom outside the kitchen.

After breakfast each morning I would take one child to the classroom. Rose would either make a cake or put a roast in the oven. I was amazed to see she used a wood stove as all the Australian brochures I had seen in England had said how advanced Australia was in every way.

Rose would then go into the lounge and play the piano. We would hear her happily rippling up and down the keyboard and enjoy the beautiful aroma of the cake or roast cooking.

We would stop at 10 o’clock and have a cup of tea and cake and then  go into the lounge where the Traeger two-way radio receiver was kept and listen to the School of the Air on the radio.

This is just how Todd Street, now Todd Mall, looked when I arrived. The bus is on the corner of the old ANZ bank.

Mr Kissell, the School of Air teacher in Hartley Street School, Alice Springs, would give a half an hour talk on history, geography or nature-study to all the children.  Then all the children in turn called Mr Kissell on their microphones and thanked him for the talk.

The children’s Correspondence Lessons from Adelaide arrived at the station on the fortnightly mail plane. Rose would send the completed lessons down on the following plane but it would take weeks before they were corrected and returned, by then we had forgotten all about that work.

None of the teachers had been to Alice Springs.  In one exercise Cameron had drawn a picture to represent a picnic we had enjoyed. It was drought time.  Cameron had painstakingly drawn every blade of grass brown.

On our first trip to Alice Springs Rose took me to meet Mr Kissell. I thought Mr Kissell would have an office equipped with advanced radio apparatus and was amazed to see him at a small table in a corner of a passage with a small shelf beside him on which sat a Traeger receiver and microphone, similar to the one at MacDonald Downs. 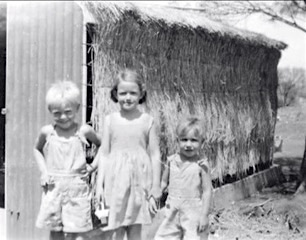 Noting my surprise, Mr Kissell said the program was relayed through the Royal Flying Doctor Service so he had no need for more equipment.

Cameron, Heather and Jock Chalmers outside the schoolroom.

After my term as governess I was sorry to leave the Chalmers family but married Martyn Petrick, the boy next door, who lived 60 km away. In  1960 we moved to Neutral Junction Station, Barrow Creek. We had two children Suzette and Grant.

Suzette started School of the Air in 1961.  In 1962 Martyn’s sister Eleanor Mengel,  her husband Joe and their two children Carolyn and Rodney joined us at Neutral. Carolyn and Rodney were of similar age to Suzette and Grant. The four children enrolled in the School of Air, making a welcome break in the Correspondence lessons, for the children and governess.

Suzette’s school highlight came when she was seven and got to drive down Todd Street in the Alice Springs Fire Engine, ringing the bell!

The visit to the Airport Control Tower, up 37 steps, was popular with parents and children.

The School of the Air moved to larger premises in Anzac High School during the 1950s.

As many of the bush families had come to town to see the Queen, the parents took their children to Anzac High School and Mrs Barrett spoke to them there, but  they gave their station addresses. The voices of those students were very clear, as they were close to the Base, while the voices of students still out bush were very indistinct because of the static. We wondered whether the Queen and Prince Philip noticed this.

Mrs Barrett drove hundreds of kilometres on her own to visit her students in their homes. She was awarded the MBE in appreciation of her services in 1966 and went to Buckingham Palace to receive her Award from the Queen. Mrs Barrett said the Queen spoke to her longer than to any other recipient.

Australian racing car driver Jack Brabham received the MBE then for his services to car racing. After the ceremony all the recipients and their guests walked out to the car park to get in their cars.  They could all start their cars except Jack Brabham, whose car had to be towed away!

‘Barrett Drive’ in the Desert Springs suburb of Alice Springs commemorates the lives of Mrs Barrett and  her husband Clarence  Raymond  (Tom) Barrett. Tom was a linesman on the Overland Telegraph Line, then a public servant. Nancy and Tom were both keen golfers. Tom and other golf enthusiasts were instrumental in moving the golf club to its present site in Desert Springs. 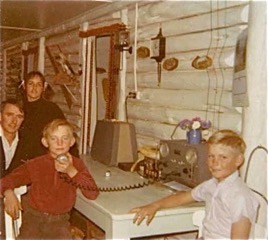 To our sorrow when Suzette and Carolyn had completed Primary School they had to go to boarding school. We missed the girls and they were both homesick.

Grant and Rodney continued at home with lessons until 1971, when they too went to boarding school. Our homes seemed so empty without the children.

We also missed our daily contact with the School of the Air.

However whenever friends from interstate come and see me my first port of call on our town tour is the School of Air Visitors Centre where we are always happily welcomed.

How amazing it is to see the fine building and new technology which School of the Air now uses.  A  far cry from the small shelf , two-way Traeger radio, table and chair with which Mr Kissell blazed the way to make the School of the Air famous.

In conjunction with the naming of the Jose Petrick Room, Alice Springs School of the Air launched its Alumni which was recently named ASSOA Muster.  The aim of the Alumni is to keep a connection with the past, meaning all past students, parents, home tutors (govies) and staff of the School and Visitor Centre.

Through the Alumni the School of the Air hopes to collect stories of all of those that have previously been involved with the school.  An event will be held each year giving the Alumni a chance to come together and celebrate their unique education.

Join via the Facebook group “ASSOA Muster keeping a connection with our past” or email vcmanager@assoa.nt.edu.au.