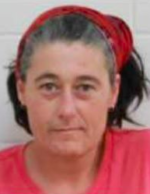 Police have found the body of a woman believed to be that of Claire Hockridge (pictured) south of Alice Springs this morning.

Formal identification is yet to be conducted and police say they will prepare a report for the Coroner.

No further details are available at this stage.

Report on December 3 by ERWIN CHLANDA

Pastoralists or their staff were crucial in the rescue of two people in a group of three who left Alice Springs on November 24 and were reported missing three days later.

The third, Claire Hockridge, is still missing, but Phu Tran met up with a pastoralist this morning, having walked 12 to 13 kilometres, and finding water along the way, according to Police Superintendent Pauline Vicary (pictured).

Ms Hockridge had been with him part of the way, but had stayed behind. Supt Vicary said this morning a helicopter search is now under way for her.

The search relied heavily on choppers although at least since Sunday, when the location of the car became known, and Tamra McBeath-Riley was rescued, trackers could have followed footprints on the soft ground – for three days now.

Asked whether Aboriginal trackers had been brought in Supt Vicary said: “No, not at this stage.

“We have some of our own members who have tracking skills, and we are using those members.

“These are conversations we can have in a debrief.

“We are happy with the way the search has been going. SARMC (Search and Rescue Mission Coordination) has done an absolutely phenomenal job.”