65 years of history now a pile of rubble

Little of it is left now, with only the western half, or stage two, of the original building (completed at the end of 1953) being demolished on its special anniversary – it will probably be completely destroyed by the end of the day.

In just under a week’s time – December 9 – it will be the 70th anniversary when tenders were advertised for the construction of the long-awaited new public school.

In an extraordinary twist of fate, this was the last day of the Chifley Labor Government before its defeat in the Federal election campaign of 1949.

The new public school was a part of Federal Labor’s detailed policies for the economic development of the Northern Territory, many of which were subsequently implemented over time by the Menzies Coalition Government that first took office in December 1949.

As the old school campus is smashed into oblivion, what has Alice Springs lost from its history and heritage?

The school’s construction was undertaken by Jim Richards and Sons, after an extensive period of time when the project failed to attract interest from potential contractors either locally or from interstate.

It was the school that brought Jim Richards to Alice Springs and was the only major project he completed. He also commenced construction of the Todd Tavern and the John Flynn Memorial Church but was killed in an accident at the church construction site before these projects were completed.

The bricks for the school were made locally at the first commercial brickworks in Alice Springs, operated by Harold Liddle who, as an Aboriginal person (and war veteran) of mixed descent, had no formal legal rights at the time.

He was a part of the successful push for equal civil rights for mixed race Aboriginal people that became law on October 1, 1953 – when the school was still being built.

The plumbing was installed by Frank Johnson, simultaneously the first Labor Member for Alice Springs.

Johnson was a member of the NT Development League established in Alice Springs in 1944 which successfully lobbied the Chifley Government to establish the Legislative Council of the NT in 1947.

Johnson also founded the first Labor branch of the NT in Alice Springs too, commencing a distinctive history of the town’s primary role as a birthplace for political parties in the NT.

As the Alice Springs Higher Primary School, classes began there in 1953 while the building was still under construction. The town’s largest capital works project of its time, the new state of the art campus was officially opened by the Minister for Territories, Paul Hasluck, on December 3, 1954.

The building already hosted the Alice Springs School of the Air (the first of its kind, established 1951) and the first local adult education night classes. 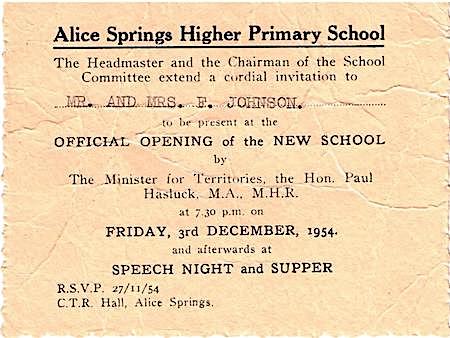 One of its original students in 1953, Cliff Bailey, became the first person from the Northern Territory to be accepted into Duntroon Military College (commencing in 1956).

This was a matter of great pride for Alice Springs at the time; and extraordinarily appropriate, given that the whole precinct of the school, Anzac Oval, Alice Springs Youth Centre and the Territory’s first purpose-built preschool (now the Over 55 Club), had been set aside as a reserve in 1937 after successfully lobbying by the town’s original RSL club comprised of First World War veterans.

The new school was also host to the Northern Territory’s first interschool sports carnival in 1954 with visiting contestants from the Hermannsburg Mission School.

A brief outline of the school’s  history follows:–

In addition, the school also served as a venue for other purposes.

It was used as a polling centre and for public exhibitions; Cyclone Tracy emergency supply base; the first Aboriginal land rights hearings in Central Australia; began the Centre for Appropriate Technology; hosted 8CCC FM radio, the first in Alice Springs, which also broadcast the first programs of the Central Australian Aboriginal Media Association; and less than a decade ago was the Youth Hub for troubled children on the streets at night.

The former Anzac Hill High School unequivocally has by far the most significant heritage value of any education campus – past or present – in the Northern Territory, and is most likely significant at a national level, too.

And now it’s gone, thanks to a Territory Labor Government.

What have we come to?

The photos below are by ISAAC BENZ. 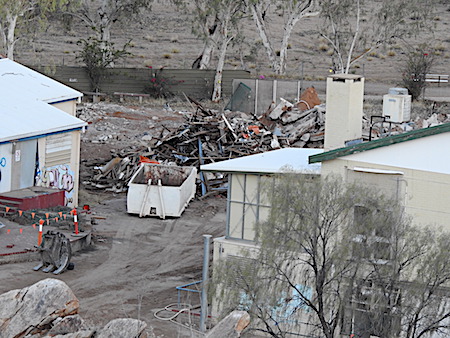 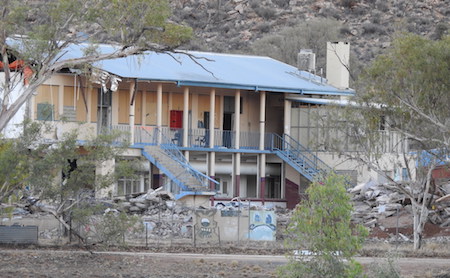 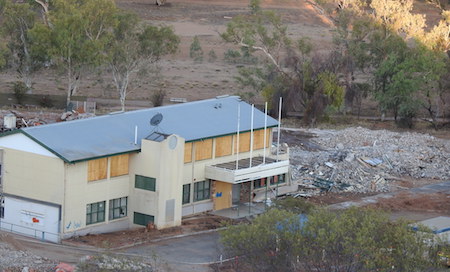 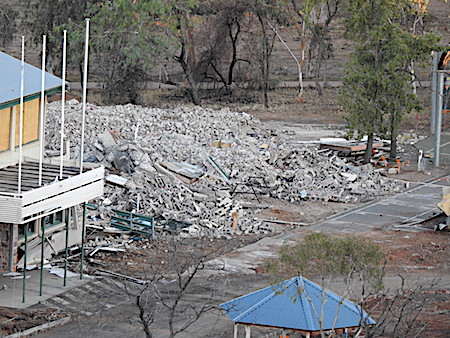