Left: This photo was taken in May. The tree was still standing recently and may be still. There are multiple dead trees on the streets of the CBD.

Councillor Jimmy Cocking was asking the question, looking ahead to the summer and the fate of the town’s street trees.

They didn’t do too well last year: almost 1000 died in streets and parks north of The Gap – 992 to be exact. Many of those dead trees are still standing.

It has been had on multiple occasions, with mainly himself and Cr Marli Banks pursuing the issues.

In May Council’s Technical Services department revealed the toll: it accounted for 5% of the town’s 20,000 trees in public places.

In that discussion Cr Banks wanted to know about watering regimes, and whether council’s one water truck was sufficient for the job, while Cr Cocking was pushing to revisit council’s policy in the area.

There was no agreement to do that, but then CEO Rex Mooney undertook to bring more information back to council.

If that happened, it seems to have been missed. 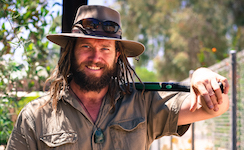 Technical Services Director Scott Allen replied that it was an “operational issue” and he would discuss it with the depot manager (in charge of the outdoor workforce).

On a brighter note, the possibility of issues like this dropping out of sight will be reduced by Council’s new CEO Robert Jennings’ adoption of better reporting methods.

He will be including tracking spreadsheets in his monthly reports to council:

One for council resolutions to follow them to completion, introduced last night.

Another for major council projects, updating their progress and budgets. This will be ready for inclusion in his February report.

And one for Elected Members’ queries.