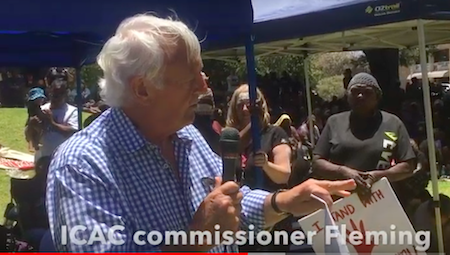 The Independent Commissioner Against Corruption Ken Fleming QC (pictured in the Alice Springs News video of Friday’s rally) will step aside from the Office of the ICAC’s continuing involvement in the investigation into the circumstances surrounding a Death in Custody in Yuendumu, according to an ICAC statement released this afternoon.

Mr Fleming requested that concerns raised with the Office of the ICAC about comments he made in Alice Springs be referred to the ICAC Inspector, Mr Bruce McClintock SC.

Mr Fleming said that he had informed the Office of the Chief Minister of the decision to step aside on this matter.

The statement quotes Mr Fleming: “From the moment this tragic incident occurred I have set out to give my time to both the NT Police and the Central Australian and Warlpiri Aboriginal communities, in a balanced manner.

“I proactively sought counsel to engage in a culturally appropriate manner with senior Aboriginal community leaders, and specifically Warlpiri people who have been impacted by this event.

“Those community leaders have called for a review of the decisions made before and after this event by public bodies, including agencies other than NT Police, and the policies and processes which govern that decision-making.

“My intention when participating in the community meetings in Central Australia was to explain our ability to independently look into these matters to the communities who are upset and seeking the truth.

“I accept that some of my comments have led to the perception among some observers that I am closer to one side than another on this matter, and so I will no longer be involved in it.

“The public must trust in the ICAC’s ability to provide independent oversight of public bodies and public officers,” Mr Fleming is quoted.

This video produced by the Alice Springs News contains a lengthy statement by Mr Fleming at the rally last Friday about his intentions to examine the circumstances of the alleged murder of Kumunjayi Walker in Yuendumu.

The statement says the ICAC Inspector has been notified of the Office of the ICAC’s plans to continue its involvement in the NT Police investigation into the Death in Custody in Yuendumu.

The statement says: “The ICAC Inspector will provide ongoing evaluation of the ICAC’s performance, practices and procedures concerning performance its functions.

“The Office of the ICAC’s ongoing involvement in the NT Police investigation will be led by a team of specialist investigators, lawyers and technical experts with significant experience managing major crime investigations, as well as serious and complex investigations.

“Commissioner Fleming will not participate in decisions or recommendations in relation to the matter.”

The Police Association has released a statement saying it “accepts and acknowledges the decision” by Mr Fleming to step down and resign from the examination.

The statement quotes the association’s president, Paul McCue, that “it’s a decision that is entirely appropriate.

“The division in the community by misinformation, particularly on social media, since the charging of Constable Rolfe has created unprecedented speculation around the process to lay the charge.

“The Association cannot, and will not, say or do anything that will compromise the fair trial of Constable Rolfe, and as previously indicated, maintains its complete support of his right to a fair trial,”  Mr McCue is quoted as saying.