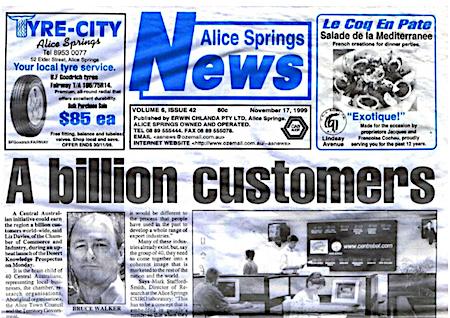 Twenty years after the cornerstone was laid for Desert Knowledge Australia the question is still being asked: “What are you guys doing out there?”

It was put to Dan Tyson on his second day in town as DKA’s new CEO, four months ago.

He has an answer: “I regard this as a business, first and foremost, capable of demonstrating its worth to the government, and to the commercial sector.

“We need to be independent, as best we can, and it needs to be measurable and accountable.”

The government should not be the sole source of revenue: “We need to spread the risk.”

The sky was the limit at the beginning: “Desert Knowledge – the industry with one billion clients” said a form you could fill in to join up in 1999.

“One third of the world’s land surface is desert and these deserts are inhabited by one-sixth of the world’s population. There is strong demand for knowledge about living sustainably in desert regions.”

This is how co-founder Mark Stafford-Smith summarised it: We people in the desert have a lot in common. It’s hot, remote, lots of flies, lots of Aborigines. Governments in the coastal cities don’t want to know us. Just wait. DKA will show them what we’re made of.

But it’s best not to dwell on what followed, says Dr Tyson.

Chief Minister Adam Giles commissioned a report in 2014 which can only be described as scathing. 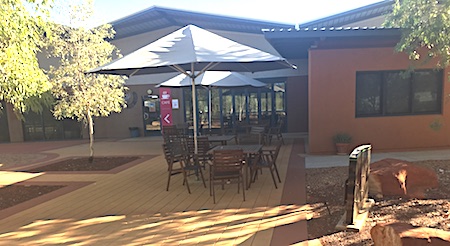 Not a great deal happened in the next five years, except that now a large generator is humming away on the grounds because there is a yet unknown fault in the cabling.

The solar display array which provided half the precinct’s electricity had disconnected itself.

A large office previously rented by the CSIRO is empty.

The two main tenants, CfAT and Batchelor College, as “foundation occupants” are paying peppercorn rents. A valuation put the market value at $1.5m a year.

The public couldn’t get a handle on the various divisions – Desert Knowledge, Desert Knowledge Australia, Ninti One. The  main job of the latter seems to have been shooting camels from helicopters and letting their bodies rot in the desert – not the desert knowledge most people were looking for.

Ninti One also has “a vast body of research” about the economic development of the desert which could be disseminated, says Dr Tyson.

Cut to the present and to the DKA’s mission, as Dr Tyson (pictured) sees it: Contribute to the social, economic and environmental development of the desert region.

Intyalheme (pronounced in-char-lum, and meaning in Arrentre “a fire starting up again”) is getting on its way with 19 signed up members to “overcome barriers to higher renewable energy penetration” in the standalone electricity grid of Alice Springs.

Power Water Corporation and Territory Generation are on board, universities and battery technology companies, but no retailers so far.

“How we maintain stability in the grid,” is how Dr Tyson describes Intyalheme’s task. He chairs the governance group.

“Everybody is grappling with these technical issues.”

Intyalheme is coming at an interesting time as the town has recently experienced one of its biggest ever blackouts.

The $75m generators at Owen Springs are still being fine tuned. The old Ron Goodin power station is turned off, and sometimes on.

No-one seems to have figured out how to integrate solar into the grid beyond a low limit without crashing the system – notwithstanding the government’s intention of the supply being 50% solar by 2030.

Is there a case for central control of the grid, by the government as is the case now, or should it be left to the open market?

Disconnected, and no-one knows why.

“We are not advocates for policy positions. We have to remain apolitical,” says Dr Tyson.

NEWS: Does this not limit the usefulness of Intyalheme? What if you found something that works particularly well?

TYSON: That will come out of the research.

NEWS: What if it finds that central control is essential, or market rule?

TYSON: If the project comes to that conclusion, that would become their finding. That would be an evidence based finding, rather than being a political or philosophical opinion.

Another current DKA initiative that is running well and expanding is Codes 4 Life developed by Michael Liddle under the direction of his Elders, as a brochure explains.

“The program encourages Aboriginal men to find value and strength in their culture and explores how they can use that to guide their behaviour on and off the football field.”

About 30 men under the guidance of four to six elders are involved, urged to “act responsibly in two worlds”.

“It is a different cultural experience here. We’re also looking at offering it to senior policy people in government. We are going to turn that into a commercial product,” says Dr Tyson. 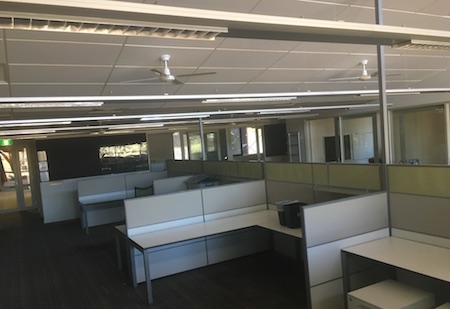 “They will experience the cultures  traditional people in the desert.”

This may create a need for accomodation in the precinct, possibly together with CfAT and Batchelor Institute: “We are all small and we need to work together.”

Empty for the moment.

“I don’t think Alice Springs should be relying on conventional tourism for our future economic independence, not the way predictions are looking at the moment,” says Dr Tyson.

“When I was in Canberra recently for the Australian rangelands conference a senior bureaucrat from Canberra was sitting next to me. And she thought that Bendigo was remote. The policies for remote areas are based on what happens in Bendigo and Bathurst.

“What we have is attractive, because it’s the real thing. People come here and it changes their perspectives.”

Dr Tyson managed a health service in Katherine with 140 employees for the past two years, and is inclined to make his point resolutely.

He recalls an exchange with Canberra officials, telling them “I am sick of you bureaucrats telling me how to run my business. None of you has ever set foot in this place.

“That was cultural immersion – and it worked.”