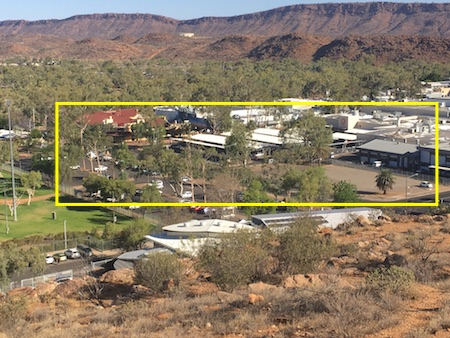 Got your seatbelt on? Come for a turbocharged ride through the weird and wonderful world of Michael Gunner’s boundless possible CBD of Alice Springs.

Adelaide based Scaffidi Group – “Company size 501 – 1000 employees” – gets a handout from Mr Gunner’s government to draw up a development plan.

Most ordinary people wanting, for instance, an extension to their house would have to hire an architect and pay him or her.

No need for that if you have lots of chemist shops around the continent and you’re dealing with the NT Government that has history-making debts.

Scaffidi owns all the pharmacies in Alice Springs including the one in the Alice Plaza shopping centre.

Alas, the public doesn’t get to see the development plan which it paid for. Mr Gunner’s department says it is commercial in confidence.

Scaffidi shares Mr Gunner’s gift of $37,500 with the Todd Tavern. Well, did they?

The operators of the Todd Tavern are leasing its land and building from Loechel Management.

Ray Loechel, the licensee of the Gapview Hotel, says Loechel Management has not been contacted by Mr Gunner’s department, has not received any grant, and has no knowledge of any development plans.

Could it be that Mr Gunner’s handout has gone to the pub’s lessees instead of the owner of the property at the top end of the Mall, namely Loechel Management, which would logically be the entity in charge of any land development?

But it’s all much bigger than a handful of dollars, according to a source with some first-hand knowledge of the dealings.

The Alice Springs News yesterday put his/her assertions to the players – government, Scaffidi, Plaza, Tavern and the Town Council at the edges. We are breathlessly waiting for responses.

Our source says what is now called the Master Plan takes in also the former Mobil Palms service station block, long vacant, earmarked for a boutique hotel, and the Plaza carpark, which would become multi-storey.

Millions are being sought from the NT and the Federal governments to supplement the privately owned assets, says the source who has seen the written proposal, but does not have a copy of it.

The valuation of these assets is tricky: For example, what percentage of the total venture will the Plaza represent?

Is this going to finally make the Plaza successful, increasing its value at the expense of the taxpayer?

For years most of its top floor has been occupied by government agencies (see comment by Alex Nelson). Are the rents paid by the taxpayer realistic or just another back-door handout to this white elephant?

Further, how much rent is coming in from the shops?

None from the empty ones, of course, and you can count them. But what about the occupied ones?

Our source suggests some shops may have tenants in them paying little to no rent.

This sounds like Alice’s answer to the Potemkin Villages: Grigory Potemkin wanting to impress his lover Empress Catherine the Great by showing her beautiful villages along the river Volga – but they are no more than painted facades.

In all this the role of the Town Council is another mystery. Are there eight elected members and one elected Mayor who have copies of the Master Plan?

Are they withholding it from the people who elected them because of the “in confidence” charade?

And if the council does not have the Master Plan – how come? This is a major initiative in the centre of the town whose local government they are.

The role of the Mayor is another vexed question.

If Mr Gunner, against all odds, manages to pull off the national Aboriginal art gallery in the CBD and be on the way to giving the Mall a pulse, then that would be a boost for Labor in next year’s election.

It would also be very good for the Mayor of Alice Springs.

But it would not be a very good for the CLP candidate for Araluen – who happens to be one and the same person, Damien Ryan.

Given that he did not resign when he was preselected, nor shows any inclination of absenting himself from dealings concerning the gallery and Mall fiasco, the public will have an ongoing guessing game between now and the calling of the 2020 election. When they see Mr Ryan’s countless Tweets, or parading in his mayoral robe and chain, they will have to ask themselves: Is this Mayor Ryan? Is this candidate Ryan?

Meanwhile he will continue to collect his $100,000 a year mayoral remuneration.

These are the questions we emailed yesterday to town councillors, the Mayor, Dale Wakefield, Michael Gunner, Todd Tavern, Ray Loechel and the Scaffidi Group:-

I’m following up leads that appear to be plausible. Please confirm or deny their substance, or provide further comment, so far as you are in possession of the facts.

Are there discussions about the re-development of the Todd Tavern, the Alice Plaza shopping centre, its carpark and the adjacent former Mobil Palms site?

If so do these discussions include a multi-storey carpark, a boutique hotel and a revamping of the Alice Plaza, or similar projects?

Which governments are likely to, or will be requested to inject public funds into these projects?

How much in each case?

Will the proprietors of the land inject private money?

What is the total estimated cost of the development?

Will existing real estate and other assets be contributed by private landlords?

If so, what assets?

How are they going to be valued?

For example, what is going to be the value of the Alice Plaza, given its current occupancy and the respective rents being paid by the occupiers?

What is the percentage ownership of the Plaza by the Scaffidi Group?

How many Plaza shops in the Plaza does the Scaffidi Group presently occupy or provide to shop keepers for free or at concessional rates?

What level of bona-fide occupancy of the shopping centre would trigger a full rent relief for Target?

How close is that trigger?

What is the current value of the Plaza? This is a relevant question, in the public interest, considering that the shopping centre would likely be a partner in a venture partly or largely funded by the public purse.

What was the actual offer of the NT Government made to the Town Council for the land swap (now rejected): Was there an up-front payment? Was there the opportunity of revising the price at a later date?

Given that he is now a candidate for the political party in opposition to the one doing the gallery and CBD revitalisation deals, is Mayor Ryan going to disqualify himself from any participation in those matters?

Will any further Town Council discussions about these matters take place in open council?

Facebook
Twitter
Pinterest
WhatsApp
Previous articleVast electorates, poor participation in our democracy
Next article'Cop will be labelled for the rest of his life as a blackfeller killer'