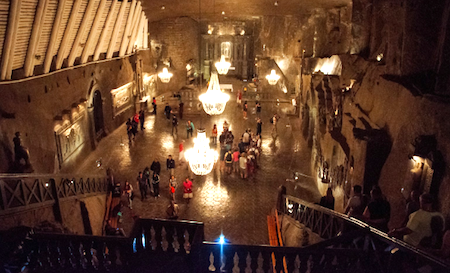 A towering banquet hall with crystal chandeliers. Boating in Venice-like canals. A cathedral. A grandiose stair case leading up a five story cavern supported by an intricate system of white pillars.

All this is 780 metres below ground where it is 26 degrees at all times, when above it may be 45 degrees or minus five.

It could happen here, just an hour’s drive from Alice Springs.

If telling a cracking good yarn can earn you a salt mine, Tellus managing director Duncan van der Merwe has what it takes, creating a challenge for of his critics, including Alex Read, policy officer of the Arid Lands Environment Centre (ALEC).

The planned mine called Chandler near the Aboriginal community of Titjikala will take out salt and put in hazardous waste, with income from visitors, in partnership with local operators, as a sideline, taking its lead from salt mine tourism in around 60 sites across Europe, 20 of them in Germany.

Tellus has a similar operation under construction in WA.

The Alice project is undergoing some changes: Rather than having a rail siding about 45 km west of the mine the rail-road transfer is proposed to happen at Brewer industrial estate 25 km south of Alice.

Tellus is putting $60m on the table for improving the very rough Maryvale Road, intending to seal the high-risk and medium-risk sections and upgrade the low-risk ones. 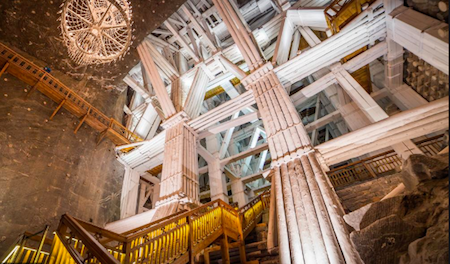 The company is talking to the Commonwealth and NT Government about putting in money “and there is interest,” says Mr van der Merwe.

While he says Tellus is keen to support local business, he is aware that NT road builders are far more expensive than those in Queensland and WA and he will be looking to get bang for his buck.

Using a rail siding west of the mine would have meant building a sealed private access road only half as long but it would have been useless for anyone else.

Titjikala and Alice Springs would benefit greatly from a sealed road between them, as many stakeholders have pointed out.

Salt mine tourism in Europe attracts two types of visitors: One to admire the magic created in the mines, some of them hundreds of years old, and the other to observe a modern mining operation – industrial tourism “is a mature industry in Europe,” says Mr van der Merwe.

It would open up tourism to the south of Alice, presently only featuring Chamber’s Pillar and Rainbow Valley, accessed from the east.

“Australians are losing their connection to mining which generates immense wealth.”

All that is much less likely to succeed while the road remains usually in lousy condition. This has led to fatalities, and is demolishing the cars Aboriginal people are travelling in to receive dialysis in Alice. 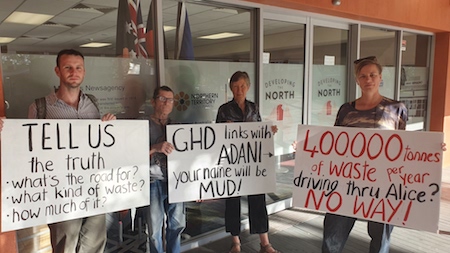 Most significant to the Alice economy, says Mr van der Merwe, is that reducing the travel time from Alice from two hours to one, will bring the location within range of daily commuting for the 270 staff building the mine (not counting “indirects”), and 150 to 180 workers operating it in two shifts.

Mr Read is pictured at left in the photo, with Rick (no surname available), Jennifer Taylor and Barb Molanus, outside the NT Government office in The Mall where the briefings took place this week. (Photo supplied.)

Mr Read says there was not “enough information to make a properly informed decision on the full impacts of the modification [using Brewer].

“They were not able to tell us how many trucks would be moving, where the waste would be coming from and exactly what types of waste will be transported.

“Until  we know this detail we can’t make a properly informed decision about the impact the modification will have on the community of Alice Springs.

“The community of Alice Springs is entitled to more answers if they are being asked to become the dumping ground for Australia’s hazardous waste.”

Mr van der Merwe says the trucks will not enter Alice Springs. They will travel between Brewer, the South Stuart Highway turn-off near the airport, and from then go south along the Maryvale Road.

The closest they will come no closer to town than 10 kilometres. 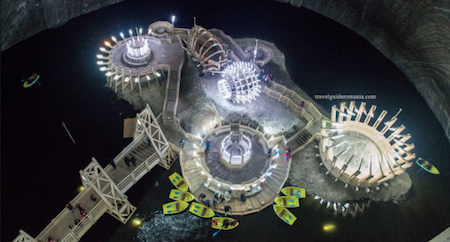 Mr Read does not suggest that Tellus will be transporting and storing materials not permitted under NT legislation, but he has doubts that the legislation is appropriate and adequate. He says the Environmental Protection Authority is under-resourced.

He also suggests that mining companies are given to making big promises during negotiations for mining rights but once they are obtained go back on their word.

Says Mr Read: “We hear this all the time from mining companies. They always aspire to the best they can. And then we get closer towards final approvals and they say that wasn’t financially achievable, we had to modify our plans, it’s not technically possible, the government put limitations on us.

“We’re striving to employ as many locals as possible. We’re striving to create as much return to the local economy. It’s all part of their attempt to boost their image with the community, to manufacture consent for a project which they know full well is going to be deeply unpopular when people realise the scale they are proposing.”

Mr van der Merwe makes it clear that much of the tourism side will be an opportunity for local businesses to become involved in such ventures as restaurants, souvenir shops, tour guiding and hands-on participation in cutting and shaping the soft material.

The success of the operators will depend on their input, through micro businesses and cottage industries, salt rooms for salt therapies, gourmet salts which could connect with Aboriginal bush foods, says Mr van der Merwe: “This is very popular in Europe. It’s aimed at well-heeled tourists.

“Alice Springs could be seen as the salt capital of Australia.”

Mr Read has expressed concern about the possibility of temporary storage of containers at Brewer.

Mr van der Merwe says each pallet of waste is sealed in a double lined pack or in barrels, or other containers.

It is then cling-wrapped and sealed with kevlar tape before being put into a shipping container that is sealed and locked.

The shipping containers would be at Brewer for not more that 24 hours except for worst case scenarios such as floods in the Hugh River.

What is the nastiest thing that could possibly be stored there? 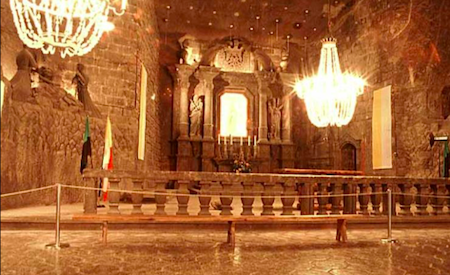 “Incredibly powerful chemical. We do not let our people near to acetone without full-blown protective equipment. Yet you can see people in beauty salons in Alice Springs using it without a mask.”

Will there be radioactive material?

“Absolutely not. Not at Chandler. We have definitively said this since day one.

“In our WA project, called Sandy Ridge, we will be able to take what is called naturally occurring radioactive materials up to low level waste, things like Xrays, smoke detectors, airport monitoring equipment you walk through, electric car batteries.

Neither facility will take nuclear waste: “It is against WA law.”

Mr Read says: “I don’t think there is going to be a market [for salt mine tourism] considering it is such a remote location.”

People will not “flock to” hazardous waste. “It does not match with the amenity or character of this place.”

Mr Read says the consultation meeting was poorly attended and not well advertised.

The facility is located here because it can be “out of sight, out of mind” of big cities.

Much of the waste could be recycled or re-purposed.

“The salt is not going to make them money. The money maker is the waste,” says Mr Read.

IMAGES from websites promoting salt mine tourism in Europe.

Town Council CEO Robert Jennings, when asked to comment, said he is waiting for more information on the Chandler mine before expressing any view or comment.