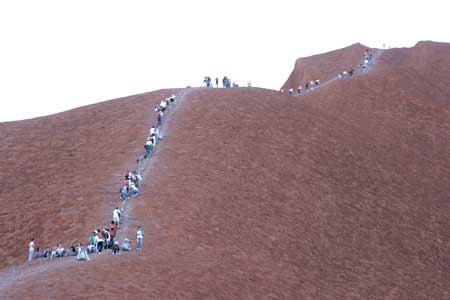 Millions of T-shirts with that inscription will now become historical relics.

The Uluru climb is being closed today, ending what for decades was one of Australia’s most popular tourism adventures.

The Alice Springs News has covered The Rock in tens of thousands of words (google them in our archive), and as television and print journalist I covered the response to the highly divisive hand-over to Aborigines in 1985.

On October 12 we asked Sammy Wilson, chair of the board of management of Uluru Kata Tjuta National Park, member of the Central Land Council (CLC) executive and director of Uluru Family Tours, for an interview.

On October 22 we supplied the questions below to the Park’s media office, saying his answers would no doubt beg further questions. We received no reply.

How many people made the decision to close the climb?

How many of them are initiated Aboriginal people?

How many people climbed the Rock this year compared to the same period last year (January to October)?

What message does that give you with respect to the popularity of the climb?

What percentage of the visitors to The Rock choose not to climb?

What percentage want to climb but cannot because the climb is closed?

What percentage of local Aboriginal people of working age and ability are unemployed?

Do you expect that number to grow as a result of the closing of the climb?

How many Aboriginal people living in or near the national park are dependent on income from the tourism industry or as park employees?

What do you say to the answer Paddy Uluru gave me, in a face to face meeting, at the base of The Rock, in the late 1970s, when I asked him about climbing (I am paraphrasing): He said if you are silly enough to climb all the way up there, go for it. There is nothing up there, no food, no water. You are allowed to know some of the stories about this place. But if you find out the very secret and sacred stories, you’d be in very big trouble. It’s the stories that are important to us, not  whether people climb up there or not.

The CLC has circulated a statement which has an embargo of 4pm.