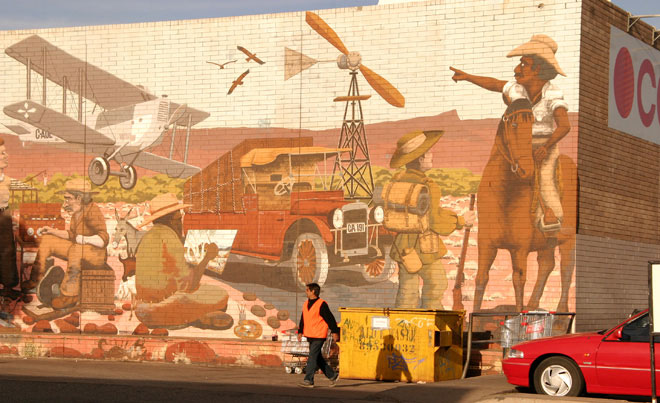 Above: On protection of the Coles mural on Railway Terrace, the Minister has decided that documentation will do. The mural is an early and relatively rare expression of an aspirational bicultural – Indigenous and non-Indigenous – identity for the town.

Following a ritual burning of the Heritage Act on Monday, by campaigners protesting the imminent destruction of the old Anzac Hill High,  the Alice Springs News put their criticisms to the responsible Minister, Lauren Moss.

What is the Minister’s view of the exclusion of “social value” from heritage criteria to be considered under the Heritage Act? (This disappeared when the act was rewritten in 2011. Formerly the Act included criteria for places “highly valued by a community for religious, spiritual, symbolic, cultural, educational or social associations”.)

What is the Minister’s view of the five year restriction on renominating a site for listing after a first nomination has been rejected?

What does the Minister say to concerns that this has left vulnerable to destruction the following sites in Alice Springs:
The Walk-In Theatre and Kenna Residence (YHA, Parsons Street)
The Old Riverside Hotel (Todd Tavern)
Former Wallis Fogarty Store (whose original facade is intact behind the hoarding of Alice Travel and Cruise, corner Todd Mall and Parsons Street)
The Coles Mural (Railway Terrace)

Via a spokesperson we received the following reply:

The Heritage Act aims to protect, preserve and celebrate places of significant historic cultural heritage in the Territory, providing a robust framework for decision-making and taking into account community expectations.

Section 11 of the Heritage Act includes criteria for heritage assessment in line with national standards.

‘Social value’ is captured in criterion (g):
(g) whether it has a strong or special association with a particular community or cultural group for social, cultural or spiritual reasons, including the significance of a place to Aboriginal people as part of their continuing and developing cultural traditions.

The Heritage Act passed in 2011 with bipartisan support. Timing provisions in the Act are there to provide a level of certainty to the community once a decision has been made to declare or not declare a place a heritage place. A place can be renominated within five years by the owner or with the owner’s consent.

The Walk-In Theatre and Kenna Residence (YHA, Parsons Street) is provisionally declared. Negotiations are ongoing with the owner about permanently declaring the place a heritage place, recognising that some sections have no heritage significance.

The Minister decided not to permanently declare the Coles Mural as a heritage place in line with the Heritage Act including a public submission process.

The decision gives consideration to the wishes of the owner and recognises that the mural has been carefully documented as part of the heritage assessment process.

Since commencement of the Heritage Act in 2012, there have been 19 places or objects permanently declared as heritage places, including the following in the Alice Springs region:

Our questions to Chief Minister Michael Gunner, arising from what was said on the same occasion, have gone unanswered.

Does the Chief Minister intend to pursue compulsory acquisition of Anzac Oval?

If so, is the intention to also pursue locating the national Aboriginal gallery on the site?

Does the government believe it has a social licence to do this?

Is the government in discussions with private developers who have plans to redevelop properties in Todd Street North and on Wills Terrace, linked to the government plans for the Anzac precinct.

If there are no longer such plans for the precinct, why is the government pursuing demolition of old Anzac Hill High? What does it intend for this site?

Is there a danger that the site will be left vacant?

Facebook
Twitter
Pinterest
WhatsApp
Previous articleGuarding his culture with spear, canvas and book
Next articleHow hard is it to keep cattle out of a small conservation reserve?