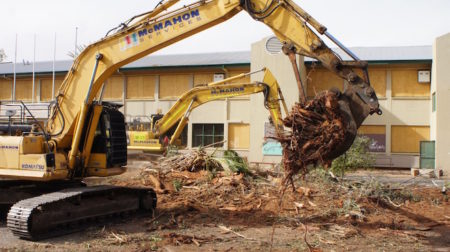 With Chief Minister Michael Gunner safely out of the country on a trade mission, and the public completely in the dark about what his government will be using the land for, the demolition of the historic Anzac High is underway, in the face of public protest.

Sir – Whilst its my natural inclination to pursue every possible option to at least delay the demolition of the former Anzac Hill High School, upon reflection I have decided not to pursue any further legal action on this matter (with the exception of a further directions hearing of the NT Civil and Administrative Tribunal scheduled for November 1).

After the Heritage Council decided not to proceed to public consultation on my nomination for heritage listing of the former high school, the Heritage Act states that, as the “affected person”, only I could seek to appeal that decision to the NTCAT.

The possibility remains of seeking an injunction from the NT Supreme Court but the prospect of success is virtually nil; it’s open to others to take a stand from now on.

I have succeeded in making the point that there is merit in my case that the old high school is of possible heritage significance and that consequently the heritage nomination process could have proceeded to public consultation.

On September 25 the Independent Commissioner Against Corruption noted: “An independent expert consulted as part of the investigation [of my complaint] gave the opinion that in his view the school building did have heritage significance and this would have been sufficient to continue on to public consultation”.

That opinion was reiterated by the NTCAT president Richard Bruxner in the first directions hearing of my appeal.

A key point to note about the former high school is that it’s frequently described as a government-owned site which means the government can choose what it wants to do with it.

However, that equally means it is a publicly-owned property or asset, yet every effort has been made to deny the public an opportunity to be consulted about its future.

That’s what my heritage nomination would have achieved if the process had been allowed to continue.

The Heritage Council failed to take this crucial point into account, and the decision taken to deny the public any say on the future of this site is clearly wrong.

For myself, all my effort up to now has been utterly in vain and it is pointless to persevere in trying to save this major heritage asset.

Everybody complains but too few are prepared to act, and that’s the reason we get the governments we deserve.

This article by Erwin Chlanda, dated April 4, 2019, contains some of the highlights of the school’s heritage story, brought together over months of painstaking research by Mr Nelson:  Gallery fiasco: school heritage process ‘massively flawed’