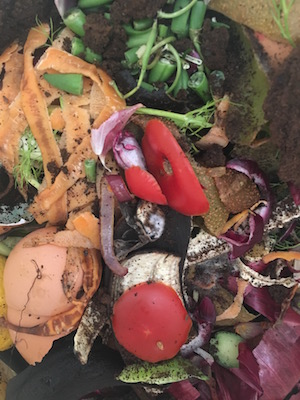 There is now a detailed update on the Town Council’s Climate Action Plan (CAP)  following concerted action by local residents  at council meetings in September, including a request for an “online real-time transparent and accessible platform for viewing the progress of the CAP”.

Left: Implementing a plan to turn food waste into a resource will provide the CAP’s single biggest contribution to reducing emissions.

What has been provided by council’s Environment Officer  is not quite that but it is a progress report on the CAP in its entirety, including what percentage of actions are completed, timeframes for the remainder and what will be involved in their implementation.

Jennifer Taylor, who was at those meetings in September, was in the chamber again on Monday to ask further questions on behalf of the group.

Ms Taylor welcomed the progress report as a “big win for everybody” and said the group was “quite excited” about the FOGO plan. The acronym refers to Food Organic and Garden Organics, and the plan is about introducing a residential collection service that would divert organic waste from the landfill, using it for compost.

Food and garden organics make up about 38% of local residential waste.

The FOGO plan is the single largest emissions reduction initiative of the CAP and when fully implemented would reduce greenhouse emissions by more than 2000 tonnes a year, according to the Environment Officer’s report.

The plan is about to be trialled, with the site trial at the landfill beginning in November, exploring over six months different composting methodologies with existing infrastructure, machinery and staff.

A community trial involving 100-200 households will start in May next year, testing different receptacles and collection processes, with council also developing ways of checking for and dealing with contamination.

Ms Taylor pointed out that the Environment Officer’s report did not include updates of council’s emissions inventory and community emissions profile and asked whether progress had been made on this.

She asked for an update on whether an online open tracking system for the CAP has been or will be installed.

She queried the apparent introduction, in the motion councillors unanimously supported on 30 September, of a longer time frame for reaching a 50% reduction in emissions. Previously the target  was 50% by 2021, but the motion specified 50% by 2030. How is that longer time frame justified, has the scope of action been increased? (The Environment Officer’s report is still working on 50% by 2012.) 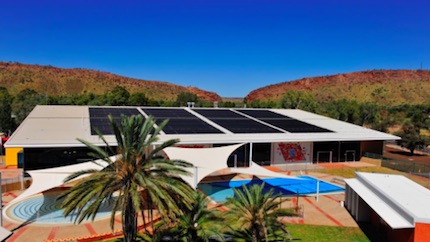 She queried the definition of the CAP as providing “a guiding document and principles for the mitigation and adaptation of climate change”, when in its current form it focuses only on mitigation, not adaptation.

Right: Solar system on the roof of council’s indoor pool. There are plans to install an additional 132.6 kW in council-owned sports facilities, taking council to 50% of its target for this action. Photo from council’s website.

She asked, in relation to the CAP’s commitment to lobby the NT Government for strong leadership on climate action, what targets council will advocate, suggesting an immediate reduction of emissions to achieve net zero by 2025 and halting any and all new fossil fuel projects.

On the CAP’s commitment to lobby the Power Water Corporation to reduce emissions from wastewater, she suggested council could encourage PWC to use biosolid waste as a resource, mixing it with green waste.

Her group is also asking that council include community and private water-use reduction as part of the adaptation component of the CAP.

On the CAP’s commitment to educating council staff and the community about the science of climate change, its potential impacts and mitigating actions, she suggested this could be pushed beyond council’s website. Declaration of a climate emergency – both a symbolic and advocacy position – could help achieve this.

“This is about recognising that climate change is a global issue and that we are a part of that conversation. A declaration would perfectly complement council’s position on urgent action and the well developed CAP and could place us as a leader where it matters most,” said Ms Taylor.

All of her questions were taken on notice, with CEO Robert Jennings promising a considered reply.

Councillor Jimmy Cocking also had a few questions and suggestions on the issues. He urged council to engage with the NT Government on their climate response when they come to town next week for community briefings (submissions on the response are due by 31 October).

Mr Jennings said he will attend one of the briefings.

Cr Cocking suggested that council could consider finance agreements where homeowners access funds to invest in renewable energy and energy-efficient additions to their houses and make repayments to pay the cost of the installation via the rating system.

Such a scheme in the USA, known as Property Assessed Clean Energy (PACE) loans, is backed by enabling legislation in 36 states. $5 billion worth of loans were issued for 220,000 home upgrades from 2010 to May 2018, making PACE the fastest-growing segment of the US lending industry, according to the website Investopedia.

On the CAP goal to partner with key local organisations to develop or progress climate action initiatives, Cr Cocking suggested council could do more than  educate people about single use plastics at the Todd Mall markets, “something we should be doing anyway”.

On its goal to educate the community more broadly about climate change and  responsive action, he said council needs to make sure the community “comes with us on this, there’s a lot more they need to be aware of”.

The CAP will be discussed by councillors in more detail at an upcoming council forum (not open to the public).