No power for eight hours on hot, humid day 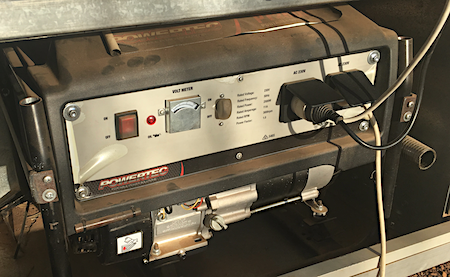 A week ago Territory Generation CEO Tim Duignan, in response to questions from the Alice Springs News about a power outage, referred to TGen’s “commitment to providing a stable and reliable electricity grid for the Alice Springs region”.

The NT Government owned electricity system is clearly not capable of providing that.

Yesterday all of the town suffered a blackout from early afternoon, and many parts of it were without power for some eight hours, including being plunged into darkness until after 10pm.

It was a hot and humid day but still under 40 degrees which will no doubt be exceeded in summer.

People who wanted to watch the Bathurst 1000 on TV missed out.

People who had generators started them up, using $700 equipment to keep their fridges going while the three year old  generators at Owen Springs power station, officially worth $75m but reportedly blowing out to $100m, were useless.

During the course of today the News will report about the causes of the blackout, what will be done about them, and what are the strategies are in place for switching the town to 50% renewables by 2030.

Many of the current problems are said to be linked to integrating solar into the gas-powered system and the use of batteries to iron our fluctuations.

The upgrade, initiated by former Chief Minister Adam Giles, and sanctioned by the current government, has now been in place for all of the three years of the Gunner Government.

We will be looking for answers from TGen, which makes the electricity, and Power Water Corporation, which owns the wires and switch equipment.

We will be speaking with the Electrical Trades Union, which last week predicted blackouts, and seek responses from NT Treasurer Nicole Manison (at left) who, on behalf of the people of the NT, is the sole shareholder of the electricity system.

There was a system wide outage which meant that power was out in the Alice Springs region yesterday.


Crews responded immediately and critical power was initially restored to priority areas including Alice Springs Hospital. Power was completely restored at about 10:47pm.

An investigation into the cause of the network outage is underway.

I have made it clear to the CEOs of Territory Generation and Power and Water Corporation that this is unacceptable.

Territorians deserve a stable and secure power system, and that is why I have called for an independent review into this incident.

POWER WAS OUT IN THE CENTRAL DESERT REGION INCLUDING ALICE SPRINGS: TERRITORY GENERATION

Territory Generation is investigating the cause of the network interruption and cannot provide further information on potential causes until the investigation is complete.

Ron Goodin Power Station will continue to be manned 24-hours a day for a period of time while the new Owen Springs Power Station is monitored for stability.

Territory Generation would like to recognise and thank the crews who responded to the outage to get the power back on as soon as possible and thank the Central Desert communities for their patience and understanding.

Electrical Trades Union members in Alice Springs have had a gutful of TGen’s incompetence as the town of 30,000 was again plunged into darkness.

The blackouts could have been mitigated or avoided altogether.

The union and its members have been proactive in telling TGen management that their systems were not fit for purpose and that they needed to have Ron Goodin Power Station (RGPS) on active standby for exactly these eventualities.

RGPS was prematurely closed and [the new power station at] Owen Springs was not adequately tested to ensure continuity of supply.

We have been urging TGen to complete required maintenance on RGPS. These requests have been denied and instead of facing a blackout extending minutes at worst residents had to endure up to 9 ½ hours in uncomfortable heat. TGen managers are playing Russian roulette with people’s lives.

Alice Springs ETU members must be included on the government’s investigation panel, to ensure it does not end up as a sham.

• Immediate maintenance resources directed to Ron Goodin Power Station to repair identified in the out of service generation plant.

• Immediate repair of the water softening plant to ensure full generation output, currently restricted due to fouling of the engine cooling systems.

• Delay of the cold standby period of RGPS until Owen Springs Power Station can be sufficiently tested under real world conditions.

• Delay the removal of RGPS operations personnel from a 24/7 shift.

ALICE SPRINGS CANNOT AFFORD TO HAVE ANOTHER POWER CUT LIKE WE HAD YESTERDAY: ROBYN LAMBLEY MLA

It effects our businesses, our livelihood, our lifestyle, our health and our well – being. It has cost people money, put people’s health at risk and caused untold inconvenience.

People don’t want to hear about Independent inquiries or how “unacceptable” it is from the Minister for Essential Services, Dale Wakefield. We just need her to fix it.

No excuses, no spin, just tell us it’s not going to happen again Minister.