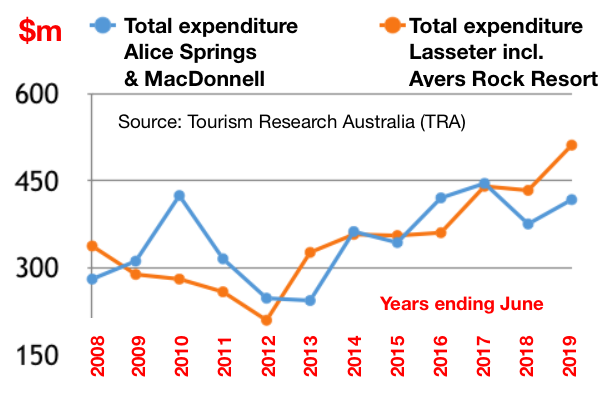 Statistics just released by Tourism Research Australia show Alice Springs, combined with MacDonnell, has experienced an increase in spend in the year ending June 2019, after a decline in the year before.

Lasseter, which includes the Ayers Rock Resort, also recoded growth and remains well ahead of The Alice, with a spend about $100m greater.

Meanwhile the Northern Territory as a whole had visitor numbers up by 11% in the year ending June 2019, according to a media release by Tourism Minster Lauren Moss, also quoting Tourism Research Australia.

She says the visitors are spending more – $2.5bn.

The close to two million domestic and international visitors include those on holiday, visiting friends and relatives, business travellers and others.

Business visitors to the Territory represented the biggest growth with an increase of 33%. Japan had a 56% jump in visitor numbers.