Home Issue 17 How do NT Labor and the CLP rate on heritage?
Issue 17Volume 25

How do NT Labor and the CLP rate on heritage? 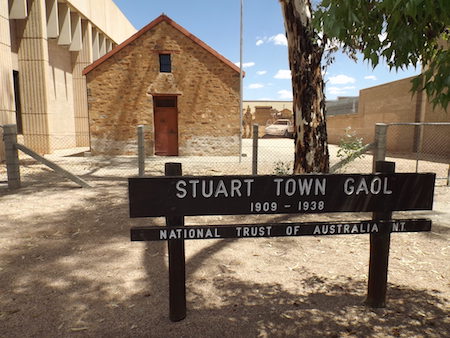 The unequal struggle to save the former Anzac Hill High School from demolition at the behest of the Gunner Labor Government provides cause for contemplation of that party’s record for saving the built heritage of Alice Springs, and on how well it compares to its erstwhile political opponent, the CLP.

The result will surprise many, I think.

Alice Springs has long been at the forefront of efforts for the preservation of heritage in the Northern Territory.

Almost a year ago the 60th anniversary of the National Trust in the Northern Territory was celebrated in The Alice, as on November 3, 1958, it began here with the election of office holders at a public meeting.

In turn the National Trust gained its impetus from the public committee to establish the John Ross Pioneers Memorial at the foot of Anzac Hill which was unveiled in September 1957.

The president of that committee was Frank Johnson, the organiser of the NT’s first Labor branch in Alice Springs in the 1940s and the town’s first Labor member during the early 1950s.

Jock Nelson, the Centre’s own Labor Member for the Northern Territory, was also a keen supporter of The Alice’s history and heritage.

In subsequent years the National Trust played pivotal roles in struggles to retain the built heritage of Alice Springs.

The first of these was The Residency which in the early 1970s was slated for demolition to make way for a new post office and Commonwealth offices.

Colonel Lionel Rose, a former occupant of The Residency, wrote to Mayor Jock Nelson in October 1972 appealing for the support of the new Alice Springs Town Council to save the building.

The Town Council in turn sought the advice of the National Trust.

Not all on Council supported this move – businessman Alderman Len Kittle believed saving the old gaol in Parsons Street was preferable to The Residency of which he declared: “There is no historic value in it at all.” (Advocate, 19/10/72).

Fortunately circumstances transpired to ensure the building’s survival; first, it was still the official residence of District Officer Dan Conway and his wife Jilna until their transfer to Darwin in July 1973.

In December 1973 the Whitlam Government loaned The Residency to the Museum and Art Gallery NT as a temporary base pending the construction of a purpose built facility in Alice Springs. However it was still intended to eventually demolish the building.

The national economic recession that took hold during this time delayed many planned construction projects, and the destruction of MAGNT’s Darwin museum by Cyclone Tracy forced a change in priorities across the Territory.

MAGNT’s temporary placement in The Residency stretched to over two decades and so the building was saved and ultimately heritage listed in 1995.

While Len Kittle misjudged the worth of The Residency, he proved prescient on the old Stuart Town Gaol.

The oldest surviving building in town (built 1908), the old gaol was also scheduled for demolition in the early 1970s to make way for a new courthouse.

In May 1973 the National Trust, led by Doreen Braitling, appealed to the Town Council for support to preserve the old gaol; meanwhile, the Department of Works also sought the Council’s view about the building but declared it was impractical to retain it.

Mayor Jock Nelson noted the age of the building but “understood” the South Australian Historical Society didn’t consider it worth saving.

Several aldermen suggested variations on dismantling and re-erecting the building, either somewhere on site or elsewhere, but this was strongly rejected by both Doreen Braitling and Len Kittle.

As with The Residency, the 1973-74 recession saved the old gaol through delaying construction of the new courthouse for several years.

By the end of the 1970s the long campaign to save the old gaol was successful, and Doreen Braitling in particular is closely associated with that fortunate outcome.

Although a fact long forgotten, Doreen Braitling along with former Country Party Member for Stuart, Tony Greatorex, were the first two people to be awarded honorary life memberships of the CLP in 1975.

A champion of local heritage, she clearly made an impression during the 1970s as a new primary school and suburb were named after her, as was a new electorate in 1983.

Ironically the current (and first) Labor Member for Braitling, Dale Wakefield, is at the forefront of the push to demolish the former Anzac Hill High School.

Even as the preservation of the Stuart Town Gaol was assured, the National Trust became embroiled in the campaign to save the old Hartley Street School. 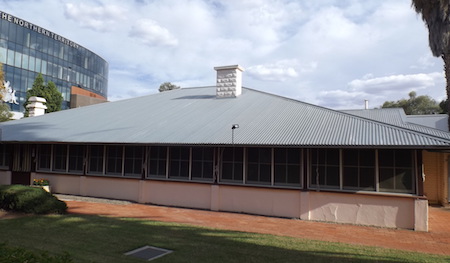 The building was used for government offices during the 1970s but was abandoned in 1979 which quickly led to extensive damage by vagrants and drinking parties.

The Town Council sought to demolish the old school for additional space for the new carpark being developed around it; however, the National Trust led by retired Reverend Tom Fleming campaigned extensively for its preservation.

A committee of “old scholars”, dubbed Save Our School (SOS), was also created to preserve the school, and its first president was Viv Johnson, the son of NT Labor pioneer Frank Johnson.

The extremely poor state of the school was a significant impediment to the campaign to save it, and in particular businessman Alderman Wayne Thomas was strongly in favour of its demolition.

Initially there was no support forthcoming from the NT Government, too, but the determination of Tom Fleming overcame these obstacles and both the Town Council and the Government switched to providing financial assistance for the restoration of the building.

This took several years – a plan of management was prepared in 1984 and restoration commenced in 1986.
The old Hartley Street School was officially opened as the National Trust’s local office and shop in August 1988 as controversy raged in Alice Springs over the sudden demolition of Marron’s Newsagency overnight on July 31.

The destruction of Marron’s exactly replicated the night time demolition of Turner House on Sunday, May 25, 1986.

This event provoked considerable outrage, not least from the two Labor members in Central Australia.
Brian Ede, the Member for Stuart, was scathing, accusing the new owners of the site (developing what is now Alice Plaza) “of a thieves in the night approach to the demolition of Turner House.

“It is an utter disgrace that Turner House has now been lost and, with it, another piece of Alice Springs history.

“I find it incredible that the NT Government has no system whereby this can be prevented.” (Advocate, 28/05/86).

Likewise Neil Bell, the Member for MacDonnell, declared “he was appalled by the demolition” and that “the planning process had to recognise historic values.

“Heritage legislation has been enacted in other states and such actions should not be possible here.”

Bell declared it was his “intention to investigate ways and means of preventing such senseless destruction” and for “the introduction of legislation in the Territory that would incorporate heritage protection within the planning process” (Advocate, 30/05/86).

Although Community Development Minister Don Dale “admitted there was no legislation that could have stopped the razing of the Turner House building,” the CLP NT Government did not prioritise new heritage protection laws.

That attitude changed smartly after the destruction of Marron’s Newsagency which contributed to the drubbing the CLP received in the Flynn by-election of September 10, 1988.

The Heritage Conservation Act was passed into law in May 1991. 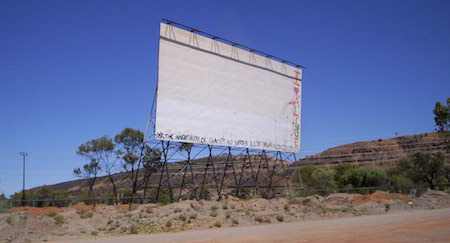 A year earlier, Conservation Minister Steve Hatton announced: “A heritage precinct is to be established immediately south of the Central Business District based around Hartley Street.

“It’s the first precinct of its type in the Territory and … it could be the forerunner for others.

“It incorporates the original hospital, Royal Flying Doctor Service, the old gaol, and the buildings around Billy Goat Hill and Hartley Street.” (Advocate, 1/6/90).

The Alice Springs Heritage Precinct was declared a heritage site in 1993; and it’s of interest to note the old gaol was still in operation as a prison (it closed in 1996).

On October 22 the Minister for Lands, Planning and Environment, Mick Palmer, announced the Government’s decision to withdraw heritage protection for the old gaol and proceed with its demolition.

The decision was “welcomed by members of the commercial sector.

“They applauded the prospect of a large parcel of prime development land coming on the market.”

The local Chamber of Commerce “said members felt the site could be appropriate for a mix of professional offices and residential development.” (Advocate, 24/10/97).

However, the Government’s decision prompted a furious public backlash, led by Alderman Fran Kilgariff who was also a member of the Heritage Advisory Committee.

She organised petitions, protests, vigils, even called for a new Central Australian political party, and was unrelenting in her vociferous criticism of the Government.

Fran Kilgariff was supported by numerous prominent individuals, notably many from the Labor Party including the Member for Stuart, Peter Toyne, and Shadow Planning and Environment Minister, Clare Martin.

An intense struggle ensued during late 1997 and early ’98.

The government was determined to proceed with the gaol’s demolition but the National Trust succeeded in obtaining a Supreme Court injunction at the 11th hour to prevent the work from proceeding.

On November 24 Justice Dean Mildren ruled that Minister Mick Palmer had exceeded his authority in arbitrarily removing heritage protection from the gaol.

The NT Government subsequently amended the Heritage Conservation Act to remove that stumbling block but gave up on plans for the old gaol’s demolition.

It was an astonishing victory achieved in a town that was a CLP bulwark at a time of that party’s absolute dominance of Territory politics.

The old gaol victory marked yet another Alice Springs heritage dispute that punctuated the long rule of the CLP yet none realised the party’s days in office were numbered.

Having been stout defenders of Alice Springs heritage for decades, how does Labor’s track record stand for the period it was in office? 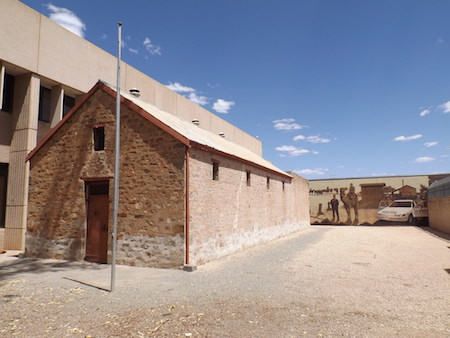 Keep in mind, despite the heritage controversies during the CLP’s long rule from the 1970s to the end of the century, the National Trust campaigns to save the Stuart Town Gaol (at left), the Hartley Street School, and the old Alice Springs Gaol were all successful and they continue to exist.

Under the ALP’s Martin-Henderson 13 year rule, the Simon Rieff Building was refused heritage protection in 2004 despite the Heritage Advisory Council twice recommending its preservation, and heritage listing was revoked for the drive-in site in 2011 to facilitate real estate development that never proceeded.

Under the current Gunner Labor Government we now face the prospect of the worst heritage loss of all with the imminent destruction of the former Anzac Hill High School.

As far as heritage is concerned, Labor’s track record is showing up as considerably worse than the CLP of old and can only be considered a complete and utter betrayal in abject subservience to unaccountable commercial interests.