Climate: Spreading the word across generations 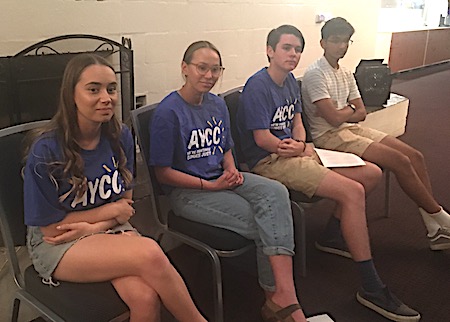 “It’s really good to be out there, talking to people rather than being on a community forum [social media] where a lot of mud is being thrown,” says St Philip’s College student Abir Srivastava, because “there is a lot of opposition and misunderstanding in the town.”

He was talking about the sometimes hostile reaction of locals to the significant participation of young people – and some not so young – to the global protests and student strikes calling for concerted action on climate change.

Abir, Jordyn Kindness, Ruby Eldridge and Matt Townsend had not hesitated to accept an invitation to address the Rotary Club of Alice Springs.

They even brought along four fellow students as observers, Lucy McCullough, Imogen Marshall, Erin Wallace and Claire Townsend, who sat among the 20-odd Rotarians, mostly engaged in conversation with them before and after the presentation.

Declaration of interest: I am the organiser of guest speakers for the club. Welcoming our visitors gave me the opportunity of drawing out the clear similarities between our members and our guests: Diverse backgrounds, keen to immerse themselves in local issues, socially ambitious and volunteering work for the betterment of the town.

The only difference was that our average age was three times that of our guests (loud protests from our side).

It also allowed me to briefly indulge in memories my own youth as a member of the 1968 generation, which between the Sorbonne in Paris and the University of Vienna and dozens in between set out to reform the world with a new take on the old revolutionary motto of “liberté, fraternité, egalité”.

“The big thing at the moment is working on the support and understanding between the different groups involved,” said Abir.

The Q&A part of the presentation was scheduled for 10 minutes but questions from the floor more than doubled that.

The well prepared introductions by the four speakers included the science and social impact of climate change, local and global responses, the commercial opportunities of developing an economy based on renewables, and the detrimental effects on the climate by the big multi-nationals.

The strength of the encounter came in the dialogue that followed, with almost all Rotarians asking questions. At all times there was mutual respect between the presenters and their audience.

What is the carbon tax?

Abir: Not all carbon produced was taxed. The tax kicked in only if a certain limit was exceeded, and that money went towards developing carbon-free power.

Eli Melky: Will the panel members continue past their youth to advocate things that are good for our community – and maybe move into politics? 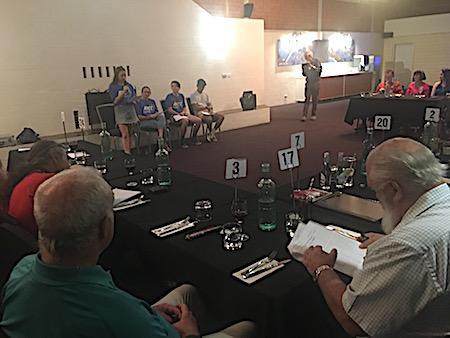 Jordyn: I don’t think I am a person who wants to go into politics. I am not very good at speaking in public. I definitely want to go down the science path, especially developing the use of hydrogen for transport of electricity.

None of the four saw going into politics as a primary way of battling the effects of climate change.

Mardi Cotterill, who’s been planting and growing trees all her life, said too may are being cut down all over the world to manufacture packaging and provide land for cattle grazing. People are too lazy to dispose of plastic properly. We tell people in developing countries: You can’t have a good lifestyle.

Ruby: We don’t want to go back to the past. Progress and avoiding pollution are not mutually exclusive. The need is to develop manufacturing processes with fewer consequences for the future.

Michael Potts, club president: Why is the Territory lagging behind in the production of renewable power?

Abir: South Australia and Tasmania are in front because they have hydro and wind farms. The NT isn’t spending enough to get a decent outcome. The solar farms have a very high start-up cost but the process is getting quicker and quicker.

David Letherby, who has solar panels on his roof: Where do you see nuclear power in the scheme of things?

Jordyn: It is expensive and takes a long time to set up. Renewable energy systems can be put in place faster.

Abir: The world is turning away from nuclear.

Nick Tyllis: What effects will you have on the CEOs who are taking over the old order?

Matt: You’ve seen the news, you’ve seen the headlines. But we are of an age when we can’t yet be CEOs and we can’t be in a position of power. A lot of us feel that the only thing we can do right now is to get our voices heard by these people in power.

The speakers said the Town Council’s new policy on climate change was clearly in part in response to the student protests. “We are the people of the future,” the panel said. Even if the CEOs aren’t listening, governments will need to.