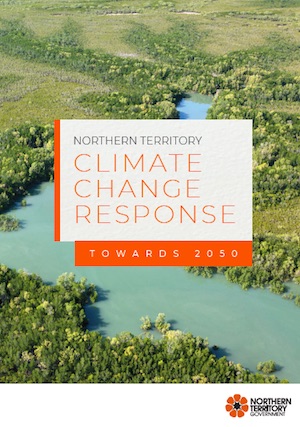 A day ahead of the global campaign, including student strikes, pushing for much stronger action on the climate crisis, the NT Government released its own draft “Climate Change Response”, asking for public feedback.

The response emphasises the government’s commitment to “growing the renewable energy industry”.

“For example, under different solar and energy efficiency grants offered by the NT Government since 2016, Territorians and Territory businesses have saved an average of almost $10 million per year and the associated reduction in emissions is equivalent to taking 7,000 cars off the road,” according to a media release by Minister for Climate Change, Eva Lawler.

The media release also refers to carbon offset projects on remote Aboriginal communities – mainly early dry season burning in savanna country, it would seem from the draft document – and to large scale battery installation by ConocoPhillips at the Darwin LNG plant.

The release does not refer to the hot button topic of fracking and its contribution to emissions at all; the response document refers to it only briefly:

“The Northern Territory Government has accepted Recommendation 9.8 of the Independent Scientific Inquiry into Hydraulic Fracturing, which states that the NT and Australian Government seek to ensure there is no net increase in the lifecycle emissions emitted in Australia from any onshore shale gas produced in the NT. The NT Government is continuing to work with the Australian Government on this matter.”

‘Not good enough’ was the swift response from the Australia Institute, an independent think tank based in Canberra which made this issue the focus of its submission to the government’s earlier Climate Change Discussion Paper.

The government’s embrace of renewables as an economic opportunity is “being undermined by plans for fracking for oil and gas,” says Tom Swann, Senior Researcher with the institute.

“If allowed to go ahead, emissions from fracking will undo any other Territory actions to reduce emissions, many times over,” he said, pointing to the graph below. 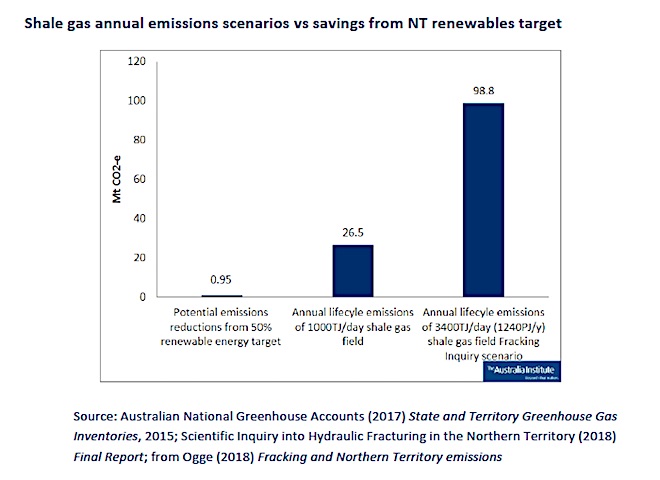 “The NT government agreed with the Fracking Inquiry that fracking was unacceptable unless all emissions are offset …Already this year the NT Government has approved fracking without offsets.”

In its submission, the institute had protested the lack of detail on the policy, with FOI attempts to find out more blocked by both the NT and Australian governments.  It was also concerned that the policy would be developed only by 2021, after much industry and government activity had been ‘locked in’.

Its analysis showed that offsets, supposed to be used as a “last resort”, would also be very expensive, would only keep emissions to existing levels and not reduce them, as well as dwarfing the gains made by investment in renewables.

There is a risk too that offsets will not work, which would mean that emissions would increase.

The institute’s submission argued that the gas industry should pay for the offsets: “They are required to make fracking ‘acceptable’ under NT policy. Governments paying for these offsets will make taxpayers subsidise the gas industry for no climate benefit.”

“It is incredibly hypocritical for the Gunner Labor Government to try and promote its climate change credentials while it bends over backwards for the polluting fracking industry,” said PCA spokesperson Jesse Hancock.

”In addition to its damaging impact on land, water, and communities, the fracking industry has a big problem with leaking, venting and flaring methane emissions.

“Methane is up to 30 times more potent as a heat trapping gas than carbon dioxide, and numerous reports have pointed to the spreading fracking industry as a big driver of dangerous global warming.

“To talk of solar power and renewable energy industries in this way is just green-washing by the Gunner Government while they plan to ramp up fracking, the biggest new polluting industry we face.”

The local environmental organisation ALEC was more diplomatic. It commended the NT Government’s enthusiasm for renewable energy including a hydrogen economy and large solar projects in the Barkly region, and its support for traditional Aboriginal carbon-management techniques. It also praised the report’s emphasis on local government collaboration to develop strategies for climate adaptation.

However, it is concerned that the response outlines a proposed increase in carbon emissions over the next ten years.

“ALEC’s view is that we should be looking to decarbonise our economy now, and the best way to do that is to ban fracking, invest in renewables and support land-based carbon sequestration,” said ALEC CEO Jimmy Cocking.

Submissions from the public to the draft response are due by 31 October.