Desert Song: We are one and free 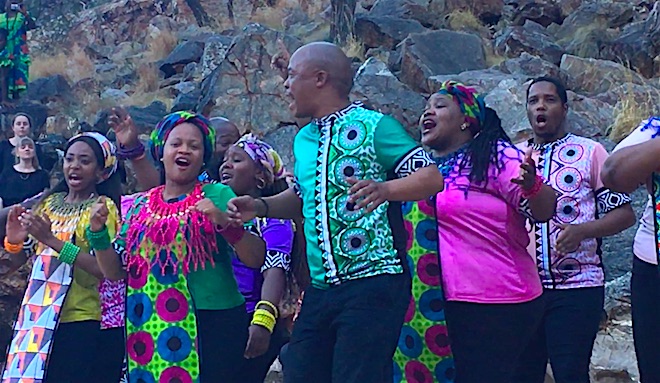 If there had been a roof, the Soweto Gospel Choir, with their supercharged energy and ringing voices, would have blown it off. As it was, we were in Ormiston Gorge, the only roof the cloudless blue sky far above, and the walls, towering red cliffs stretching away into the distance. Even in this grandeur, the Soweto performers were mighty.

But they came towards the end, when the shadows had stretched across the river bed. Much had come before.

Asante Sane began their vocal warmups. An Alice Springs choir, they assemble every winter, following the arrival in town of Morris Stuart, their musical director and the indefatigable creator of the Desert Song Festival. This a cappella concert in the gorge, in its seventh iteration, was the finale of this year’s festival.

Voices ran up and down the scale as the audience settled on the sand bank across the water. It was a warm day and you could hear occasional splashes as older children jumped from the rocks, and the chatter of others playing in welcome cool.

The choir opened with “Stand as one”, a de facto Northern Territory anthem. This simple song didn’t fully show what Asante Sane is capable of, but Stuart explained they had had less time together than usual this year. The ambitious Desert Song program, however, was undiminished, and for those who made the journey 135 kms west from town, the concert in the gorge offered a riveting program of highlights.

Stuart welcomed Soul Harvest to the ‘stage’. This concert is low tech. The stage is a sandy ledge at the bottom of the cliffs, the rockface provides the amplification, the majestic river red gums, the proscenium arch, this gospel choir from Vanuatu, for the moment, the sheer delight.

“I walk, I walk / I search, I search / I turn around, everywhere / there’s no-one, no-one like him.” Each line was acted out in unison – stepping, hands shading eyes, turning, in their fervent search for Jesus.

The simple black and white dress of the women’s choir that followed, Aurora, from Adelaide, contrasted with the vivid tropical colour of the Vanuatuans but in refinement of presence they were on a continuum.  They sang first an exquisite Appalachian song, “Bright Morning Star”, then a chorale by Bach, “Come Sweet Death”, its mournful harmonies accompanied by a ballet of hands, beckoning, drawing into their hearts the sought-after state. 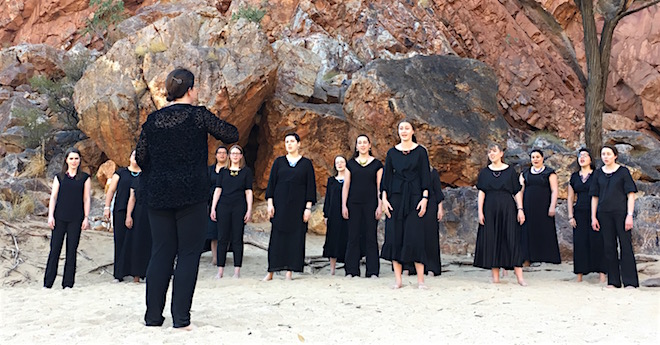 This ceded to another religious song in Latin, sung by a mixed choir, Chime, from Melbourne, who followed up with a rousing version of “Waltzing Matilda”. What else, as their musical director asked, when you’re performing by a billabong?

Only then did we hear from the Central Australian Aboriginal Women’s Choir (photo at bottom), who, together with Asante Sana and Stuart, laid the foundations of the Desert Song Festival. Its strength from year to year lies in these deep roots into the community, grown from the ground up, meaningfully, do-ably.

Stuart directed them through four hymns, with their unique rather plaintive sonority, singing in their desert languages, expressions of the Christian faith they have made their own. 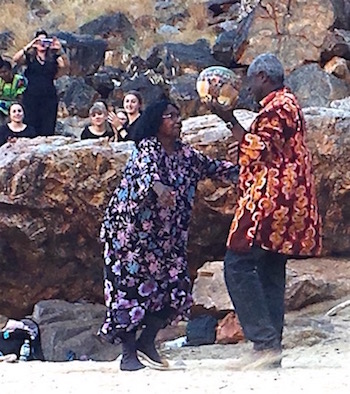 Longtime director of the Ntaria Ladies Choir, David Roennfeldt then took over, leading the choir through “Hymn 141” in Western Arrernte, dedicated to Stuart and his wife, Barbara.  “We love having you here,” said Roennfeldt as they were presented with gifts of appreciation.

Morris Stuart held his aloft and its maker came forward to embrace him (pictured). She is the Hermannsburg potter Judith Inkamala, and the pot is a smaller version of one that is on show at Araluen in the Desert Mob exhibition. Titled Desert Choir, Stuart is depicted in figurine on the lid, and the Areyonga members of the full choir painted on the body of the vessel.

The love goes both ways and has generated an extraordinary trajectory for them all, of performances in venues around Australia, in Europe and the USA.

Another surprise was in the wings. QVLN is a return guest to the festival and a familiar of this concert in the gorge. His full name is Quetzal Guerrero. Of Mexican/Brazilian and Native American roots and a longtime Los Angeles resident, he now lives in Australia. He performed a stunning duo with fellow violinist Eric Avery, a Ngiyampaa, Yuin, Bandjalang and Gumbangirr artist, the two seeming to channel a conversation of their instruments with one another.

Then Q returned to the stage with Soul Harvest in a chant and dance collaboration that they had worked up only last Friday. This was no doubt one of the “new things” that their musical director said they had learned during their visit to The Centre (sponsored by the Department of Foreign Affairs and Trade) and would be putting into practice on return to their island home.

Finally it was the turn of the Soweto Gospel Choir, thrilling from the first clap and drumbeat as they made their way from the wings to centre stage. They sing and move with incomparable conviction and joy, and a great sense of humour as we saw when they led the dancing during an ensemble performance of all the choirs.

Not surprisingly, with the mass of voices and the flow of all that energy, this was the pinnacle moment of the afternoon. Everyone had learned a fabulous song from the Soweto repertoire and this was followed by the deeply moving  Australian song, composed by songwriter and choir leader Rachel Hore, imagining what the human remains held in museums around the world might say if they could speak.

It was sung at the gorge by combined choirs in 2017, in English, Western Aranda and Pitjantjatjara. This year, the International Year of Indigenous Languages, we also heard verses in an Indigenous language of Vanuatu (there are hundreds, the highest density of languages per capita in the world) and in Zulu. It was a very affecting reminder of the extent of colonialism and its impact on Indigenous peoples.

One aspect of this in Australia is being tackled head on with a proposed change to the national anthem, “Advance Australia Fair”. It was sung for the first time on opening night at Desert Song. Now we heard it in the gorge from the combined Australian choirs and the Vanuatuans.

The key change is in the first verse, the only verse that most Australians know. It is just one word: instead of “we are young and free”, it is proposed to sing, “we are one and free”. The significance is that the word “young” erases Indigenous history from the national song. As one of the campaign organisers said, “We can’t live with an anthem that effectively excludes any of us.” 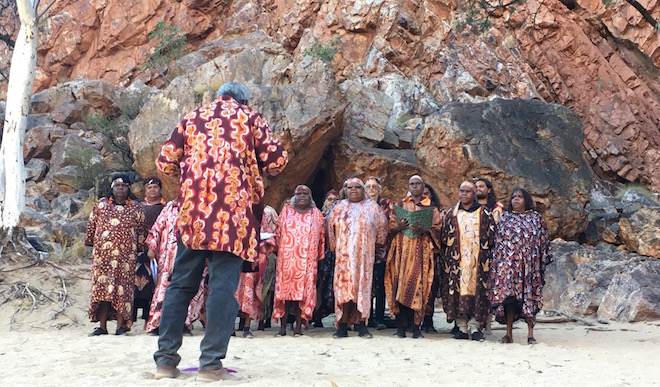 Changes to subsequent verses develop the recognition theme while also celebrating “core Australian values”. The organisers have launched a petition in support of the new lines, which Stuart urged all Australians to sign.

It was time to go. The gorge emptied quickly but at the edge of the performance area another moving scene was unfolding. The Soul Harvest singers and the Central Australian Aboriginal Women’s Choir were bidding each other farewell.  The befitting way, one gospel choir to another, spiritual song for spiritual song.